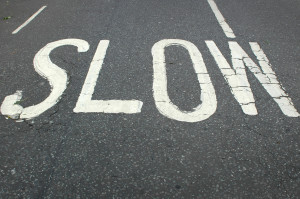 A few weeks ago I was ticketed for speeding on the William Bennett Bridge over Okanagan Lake. I made that the subject of a recent column. I confessed that I had failed to practice what I preach.

One of my agendas for writing this column has been to encourage safer driving and I had failed by daydreaming and not watching my speed. I certainly wasn’t going to be caught speeding again.

Since then, I have been very careful to keep my speed to within 10 kilometres of the posted limit as I cross the bridge, and drive up Bridge Hill, where the 60 kilometre per hour zone seems to go on forever and two lanes of traffic whizz by me.

The other day, I got pay-back for my responsible driving. I was heading up Bridge Hill in the centre lane. There was a sign telling me that slower traffic should take the right lane. At 10 kilometres above the  posted speed, I was the slower traffic by about 20 kilometres per hour.

So I signalled and moved into the right lane. A couple of sweet fellows in a small white sedan approached from behind, intending to pass me on the inside. I didn’t cut them off by any stretch but they had to slow down when they caught up to me.  They swerved into the middle lane and, as they passed me, both of them gave me the most foul look you can imagine, accompanied by two emphatically directed middle fingers.

A bigger man might have signalled them to pull over so that I could pound on their heads. I’m not that kind of guy. Yes, I struggle to turn my head from left to right because of how muscle bound I am, but far be it for me to use violence to make me feel better.

OK, maybe I’m not quite that muscle bound. But really. What do you do? You are driving responsibly.  You are following the law. The rest of the world seems to think that you’re being an A-hole for doing so. You are getting in their way.

An analogy might be of the ill-fated lemmings. En masse, they wander off cliffs into the ocean, destined to drown. Are the majority of drivers who disregard the extended 60 kilometre per hour speed zone bad drivers, destined to cause a crash at some point?

Are we doing a public good by setting up radar traps at such places to try to slow the flow? Or, perhaps, is the flow an indication that the speed limit is the problem? Am I the one smart lemming? Or perhaps I’m the dumb one causing a hazard by not keeping up with the traffic flow?

The road rage I encountered was inexcusable but it is a reality that a certain percentage of men are Neanderthals and blocking the flow of traffic is going to cause such pea brains to react. Perhaps if drivers understood the reason behind what seems like an unnecessarily low speed limit, they would respect it.

I have no problem at all with radar traps in school zones, for example, because it’s easy to understand the importance of slowing to a crawl when there is the potential of children on the road.

I respectfully request that those responsible for determining the speed limit across the bridge and extending part way up Bridge Hill submit a letter to the editor explaining the reason behind the 60 kilometre-per-hour speed zone to assist us in this matter.

I invite others with an opinion on the matter to send me an e-mail.

Published May 16, 2010 in the Kelowna Capital News