Another day of remembrance for dead and injured, and the multitude of others impacted, is almost upon us. 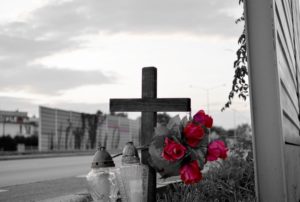 The initiative came from an international organization called RoadPeace in 1993. They conceived of a world day of remembrance for road traffic victims.

Initiators conceived of a lofty goal: A day of respect by and towards all road users; a day on which exceptional care is taken by motorists; a day of courtesy at the wheel and a day when all road laws are respected so that a world day without any crashes resulting in injury or death will become a reality.

The World Health Organization added its support in 2003. And in 2005, the United Nations provided its international endorsement, encouraging governments around the world to commemorate the day.

Canada stepped up in 2008, designating a National Day of Remembrance for Road Crash Victims on the Wednesday following the third Sunday in November.

In Kelowna, a Day of Remembrance for Road Crash Victims has been proclaimed annually since 2012. And the eighth annual commemorative event will be held Wednesday evening, November 20, 2019.

The location is the Orchard Park Mall parking lot, adjacent to one of the most dangerous intersections in the Okanagan: Highway 97 and Dilworth Avenue.

There is value in taking time to contemplate preventable loss. Particularly when the loss is ongoing.

More Canadians have died in road traffic incidents than in both World Wars combined. And the carnage continues marching forward.

If we pause to contemplate the magnitude and preventability of this ongoing loss, we might become motivated to take constructive steps to reduce it.

And yes, constructive steps can be taken. This is not a problem without solutions.

A lot of work has been done to study the causes of crashes. The impact of distraction could not be more clear.

And scientific studies have concluded that “brain off the road” is the key problem. Our eyes see, but our brains fail to process, up to 50% of what’s coming at us through our windshields when engaged in a cell phone discussion.

Yet we continue with road safety laws that permit taking your brain off the road and into a hands free cell phone discussion and voice to text behaviours.

We are sending drivers the wrong message. The hand held cell phone ban is making things worse instead of better.

Please join me, others whose lives have been impacted by death and injury from road traffic incidents, representatives of fire, ambulance and police services, and other concerned citizens for the brief ceremony. We will be gathering at 5:30 p.m. with the ceremony to begin at 6:00 p.m. sharp. 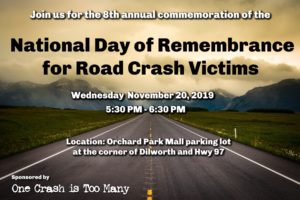 Among those remembering the loss of a loved one will be Hideki Mimura who lost his daughter on the Coquihalla on April 2, 2017, and will be travelling from his home in Japan to attend this event again this year.

Please watch, and share this two minute video about the event: https://www.youtube.com/watch?v=mrrj77lPGZw.