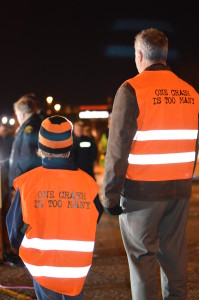 I am filled with gratitude.

The fourth annual event to commemorate the National Day of Remembrance for Road Crash Victims on November 18th was well attended.  I didn’t do a count myself, but I am told that there were over 100 people.  The numbers have been slowly increasing each year, a trend that I hope will continue.

I am grateful, and thankful, for those beautiful people in my world who have been coming to this very chilly event, each year, to support me.  Road safety is important to these friends and co-workers, but it is their kind support of me that brings them out.  Thank you.

I am grateful, and thankful, for the RCMP, fire services, and ambulance services leadership, specifically Inspector Brent Mundle, Operation Supervisor Glenn Braithwaite and fire Chiefs Jeff Carlisle and Jason Brolund, whose attendance (along with supporting firefighters to operate Ladder No. 1 which illuminated the event), was squarely all about road safety, but who put their trust in me in my organization of this event.

I am similarly grateful, and thankful, to Dave Gibson, Regional Safety Officer of School District 23, ICBC, Designated Dads, Mothers Against Drunk Driving, the Kelowna and District Safety Council, Young Drivers of Canada and Braintrust Canada for their representative attendance at the event.

I am grateful and thankful to Harry Callaghan of Astral Radio and Julie Hill of Power 104/Q103.1, who assisted with promoting the event, and Lauren Pullen of Global News, Barry Gerding of the Capital News, and Nicholas Johansen of Castanet for reporting on the event.  Without promotion, there would be no event.  Without reporting, the important road safety message doesn’t get out.

Join the RCMP and others who refuse to use the word “accident” when referring to a road traffic incident, because the word “accident” is suggestive of a random, unavoidable part of our world.   The RCMP who investigate crash after crash after crash are the most qualified to help us understand that the vast majority of crashes are entirely avoidable with simple common sense and attention to the task at hand.

The subtle use of language can have a powerful impact on attitudes and behaviours.  How incredible if the local news media might follow this important road safety protocol.   I wonder if ICBC might follow suit in all of their publications?  Might this be an initiative that “takes hold” and makes our community a leader in road safety?  I confess that I am feeling a touch of giddy optimism in that regard.

This and other small seeds of change have the capacity of germinating and growing to help change our driving culture to one where the act of driving is recognized to be an inherently dangerous activity, just like operating power saws and firearms, commanding a similar level of sensibility and undivided attention.

That’s all it will take to greatly reduce the unbearably significant ongoing losses arising from road traffic incidents in our communities.