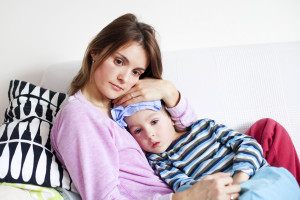 David and Collet Stephan have been criminally convicted by a jury for causing the death of their 19 month old son, Ezekiel, who they dearly loved and dotingly cared for.

It is a horrific nightmare.  The loss of a child is unbearable, in itself.  Feelings of guilt when something, anything, might have been done to prevent that loss can tear you apart.  These parents of three other children, aged 8, 3 and 1, now face sentencing that could well include incarceration.

The parents thought their son had croup, or the flu, and reportedly treated their son “…with remedies that included hot peppers, garlic, onions and horseradish and a product from a naturopathic doctor aimed at boosting his immune system”.

My cousins remember cloves of garlic hanging around my neck as a child.  I don’t have a memory of that, specifically, but I do remember all sorts of home made tinctures and teas and other natural remedies.  Parents who take the time and spend the energy to learn about and administer natural remedies to their children, in my view, are going a significant distance “above and beyond” for the wellbeing of their children and should be applauded.

It wasn’t the croup or the flu.  Ezekiel had bacterial meningitis, a very serious illness that according to “Centers for Disease Control and Prevention” (CDC) comes with symptoms that include fever, headache, and a stiff neck.

According to CDC: “Bacterial meningitis is very serious and can be deadly. Death can occur in as little as a few hours. While most people with meningitis recover, permanent disabilities such as brain damage, hearing loss, and learning disabilities can result from the infection.”

Treatment for bacterial meningitis is with antibiotics, and of course it is important that treatment be started as soon as possible.

As with everything in life, a parent’s investigation of and use of natural remedies falls on a spectrum.  These parents were at the far end of that spectrum.  Ezekiel had never in his life been taken to a medical doctor, and they clearly did not embrace that option.

When he stopped eating and drinking, they ensured he had plenty of fluids with an eyedropper.  When he became so stiff that they couldn’t put him into his car seat, they laid him on a mattress as they drove to pick up yet another natural remedy the day before he died.

They did absolutely everything they could think of to help their child, except the one thing that screams out at me, and must have screamed out to the jury:  they didn’t take Ezekiel to a doctor.

You can find David Stephan’s impassioned “Dear Jury” posting on his Facebook page.  In it, he expresses his concern: “The flood gates have now been opened and if we do not fall in line with parenting as seen fit by the government, we all stand in risk of criminal prosecution”.

It is a valid concern.  Where is the line that determines the point at which a parent’s child care choices will be second guessed to the point of a criminal prosecution?

Criminal law experts could offer their opinions in answer to these questions.  In my view, however, these questions ought not to be answered on the basis of legal precedents that are built on a criminal code offence that has largely remained as it was when enacted in 1892, the likely origin being English 19th century legislation dealing with the protection of inmates of penal institutions (for a history lesson, see paragraph 47 of the Ontario Court of Appeal in R v. J. (S.)).

In my view, these issues ought to be discussed and debated with updated laws put into place under the leadership of our elected officials.  The courts continue to reluctantly fill the void of that leadership, another glaring example being the “assisted suicide” issue that required our Supreme Court of Canada to strike down archaic provisions of the Criminal Code before our elected leaders would “step up” to provide any leadership at all.

Do your agree?  Put whatever pressure you can on your elected representatives to step up.