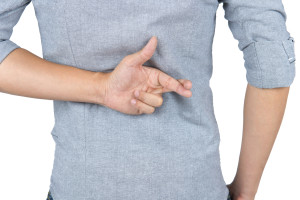 Facing the wormy innards of an apple you’ve just chomped into is a special kind of ugly.

There are bad apples in every barrel, even the very best of barrels: priests, police officers, doctors, teachers and yes, lawyers.

Car crash claimants are no exception.

One recurrent theme of these postings is the importance of hiring a lawyer when pursuing a car crash claim. This week’s column is intended to discourage any bad apples out there from taking that advice.

Some people are under the impression that lawyers have a professional obligation to take on clients, regardless of how morally challenged they might be. Isn’t everyone accused of a crime entitled to a lawyer, however much blood may be on their hands?

Totally apart from professional obligations, wouldn’t a lawyer rub his or her hands together to get a client who is willing to lie in order to get a big, fat settlement that results in big, fat legal fees?

In reality, there is absolutely no obligation on a lawyer to take on any particular injury claim. Yes, everyone facing a serious criminal charge is entitled to a defence lawyer, but there is no such entitlement for people pursuing injury claims.

Further, it is very much against a lawyer’s interests to take on such a client. A dishonest or exaggerated claim is more likely to result in a very low result than a high one.

The reason that credibility is so important is that most crash injuries are injuries to the muscle tissues, tendons and ligaments that do not show up on x-rays, MRI’s or CT scans. For many claims, the only proof of injury is what the injured person says.

If an injured person is found to be a liar or exaggerator, then his or her descriptions of pain and suffering are not likely to be believed, and the claim will disappear.

Lawyers do not want to risk a claim dissolving due to a loss of client credibility. A whole lot of work goes into the proper prosecution of a car crash claim. Thousands, and sometimes tens of thousands of dollars worth of lawyer time are spent. Nobody wants to work for nothing.

Perhaps most importantly, lawyers are bound by ethical standards. As officers of the court, we are prohibited from allowing a client to give false evidence. If a client of mine were to lie on the witness stand, I would immediately withdraw from the case.

For those who think they could keep the wool pulled over their lawyer’s eyes and pursue a dishonest or exaggerated claim without the lawyer knowing: Think again. A good personal injury lawyer is always looking for inconsistencies in evidence, because sure as the sun is going to rise and set, the insurance company is going to uncover those inconsistencies.

As friendly as my regular client consultations may be, the probing questions I ask are very much in the form of cross examination. Even the most minor and innocent of inconsistencies are rooted out. If I was to uncover actual dishonesty or intentional exaggeration in any of my clients, I would immediately boot him or her out of my office and send my former client a hefty bill for whatever time I had already spent on the file.