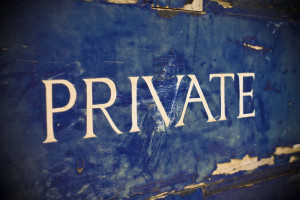 Discussions with your family doctor can be intensely personal.

You reasonably expect that those discussions are, and will forever remain, completely confidential.

You would be mortified at the thought that the discussion about the herpes you picked up from your cheating spouse would ever leave the confidential confines of your doctor’s file.

One of the reasons why you felt comfortable consulting with your doctor about abortion options as a very young woman was that you knew no one would ever find out.

Your consultation about whether or not intervention for alcohol or drug abuse might be appropriate would destroy your reputation if it ever saw the light of day.

I very much regret to advise that your reasonable expectation of permanent, safe confidentiality is lost, at least to a certain extent, if you are the victim of a car crash.

If you choose to hire a lawyer to assist you with your claim, you will be asked to sign similar forms, authorizing release of your medical records to your lawyer.

That waiver, though, is not absolute.  There are two very important restrictions.

One restriction has to do with how deeply the insurance company can probe within your clinical history.

If records flow through your lawyer, instead of directly to the insurance company, you will be consulted about releasing records containing “sensitive” subject matter.

If excerpts of your clinical records containing sensitive subject matter have absolutely no relevance to your injuries or to the losses you sustain as a result of those injuries, then those excerpts can be blacked out.

Unfortunately, all too often those victimized by car crash injuries are further victimized by the psychological effects of those injuries.  It is not hard to imagine how depression might arise from chronic pain, for example.

If depression or other psychological impacts of crash injuries, such as Post Traumatic Stress Disorder, become issues in your case, other life circumstances that might impact on your psychological health become relevant.

Those intensely personal consultations with your doctor or psychologist that would otherwise have no relevance to an injury claim all of a sudden take on meaning in the context of your case.

For example, the insurance company is entitled to investigate and obtain medical opinions about whether or not you would have developed depression anyway, even if the injuries had not occurred, because of all the other psychological stressors in your life.

If the depth of the insurance company’s probing into your clinical history is not restricted, there is another restriction that should protect against intensely personal information in your medical history from becoming public.

Of course, if you end up having to use a trial to force the insurance company to pay fair dollars, sensitive documentation or information may be tendered as evidence in a public trial.

Fortunately, a very small percentage of personal injury cases end up in trial, and courtrooms are typically dead empty except for the Judge, Court Clerk, lawyers, and the testifying witness during most personal injury trials.

If you have any concern about your confidential medical history being exposed in the context of a personal injury claim, please consult with a lawyer.  Unlike doctor/patient confidentiality, the confidentiality between lawyer and client is about as iron clad as that between a priest and parishioner.