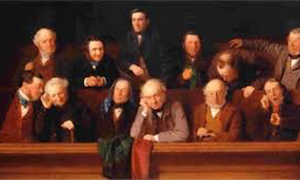 A good friend of mine forwarded an e-mail to me the other day with the question, “Could these possibly be for real?” The e-mail was titled Stella Awards, and gave a top seven list of the most outlandish lawsuits and verdicts in the United States.

First place went to Mrs. Merv Grazinski, who supposedly put her motorhome on cruise control at 70 miles per hour, then left the driver’s seat to go to the back and make herself a sandwich, resulting in a crash.

She supposedly sued and was awarded $1.75 million by a jury on the basis that the manufacturer of the motorhome ought to have made it clear in the manual that cruise control isn’t some sort of auto pilot that allows you to leave the driver’s seat.

The other six stories were similarly outlandish. None of the stories had a shred of truth to them. That e-mail, and others like it, circulate from time to time, and they all irritate me. Why? Because they paint a very unfair picture of the civil justice system and of those who hire lawyers to bring lawsuits.

I wonder to what extent the insurance industry feeds that kind of misinformation. If the public is poisoned by misinformation to the extent that they view trial lawyers and their clients with suspicion and contempt, jurors will walk into courtrooms with preconceived notions and biases that can lead to injustice.

Who profits from that? Insurance companies. The Stella Awards, as absurd and untrue as they may be, gain credibility because they are named after a real life lawsuit that had been brought by Stella Liebeck, a lady who was burned by coffee she had purchased at a McDonald’s drive-thru. The jury who heard the case awarded her $2.9 million.

The thing is, the nutshell description of the case that makes it sound absurd is an unfair insult to the jurors who actually sat in the courtroom, heard all the evidence, and rendered their verdict.

How could it possibly make sense to award any compensation, let alone $2.9 million, because a person spilled coffee on herself? First, Ms. Liebeck wasn’t being the careless driver you may all be thinking she was. In fact, she was a 79-year-old lady riding as a passenger and the driver had pulled over so that Ms. Liebeck could put cream and sugar into her coffee. It was while attempting to remove the lid that she spilled the coffee on herself.

Still, how could McDonald’s possibly have been at fault when clearly the problem was an elderly lady’s clumsiness? I’ll get there. First, the injuries. This senior citizen suffered third degree burns. She required skin grafts to her pubic area. Imagine sitting as a juror in that case. Imagine hearing about how seriously this lady was burned.

That though, in itself, would not have been enough for me to award Ms. Liebeck any money. People are injured or killed every day because of their own carelessness or clumsiness. Sure, I would feel sorry for the lady, but I would be wondering why the heck there was a lawsuit.

There’s a kicker that is never explained in those pathetic Stella Awards emails that the jury was punishing McDonald’s for apparently putting corporate profits ahead of customer safety. Yes, Ms. Liebeck would not have been burned had she not been clumsy when she tried to add cream and sugar to her coffee.But Ms. Liebeck is not the only clumsy person on the planet.

The reason? The jury heard evidence that brewing coffee at a higher temperature results in greater corporate profits because it requires less coffee beans.

My basic understanding of it is that the hotter the water, the more flavour is leached out of the beans. They heard evidence that led them to conclude that McDonald’s management was aware of the scalding risk associated with the higher temperature, but made a corporate decision in favour of corporate profits at the expense of customer safety.

The substantial award represented only one or two days of profits earned by McDonald’s restaurants arising from the sale of coffee. The jury was sending McDonald’s a message.

McDonald’s apparently heeded the message and reduced the temperature of their coffee. Isn’t it amazing how hearing the full story can make a jury’s decision make sense? Next time you get one of those Stella Award emails, please reply with a link to this column.