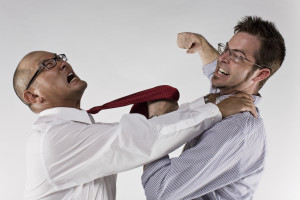 You know what they say, one or two people can spoil it for everyone. It’s the honest people that get to pay the price for it.

I pulled that from a recent e-mail from a lady who reads my column. She was referring to the common suspicion of dishonesty about those making claims against ICBC. It is one of life’s truisms. The majority of honest, decent, morally upstanding people pay a steep price for the actions of a dishonest minority. There is a saying for that, isn’t there?

I’ve been wracking my brain, but can’t come up with it. E-mail me if you can help me out. I’ve previously used something like “It just takes one bad apple to spoil the barrel” but that doesn’t really work because the other apples in the car crash claim situation are not spoiled, it is just that they pay a price.

My very first column, published two years ago was titled It’s Not About Screwing The Insurance Company. The theme of that column was that the public perception of car crash claimants and lawyers as conniving liars and cheats who make bags full of money by screwing the insurance company is a false one. I explained that the opposite is true.

The reality is that crash victims face an uphill battle trying to achieve fair compensation for their injuries. The reality is my job is putting together as strong a case as possible so my clients are not the ones who get screwed.

Yes, some people are dishonest. Yes, some people try to cheat insurance companies. We’ve heard the stories about accidents being staged so that people can make a quick buck pretending to be hurt.

We’ve also heard about people making up or exaggerating their injuries. Dishonest crash claimants are no different than fraud artists who steal identities, thieves who break into houses, white-collar criminals who cheat on their income tax, and yes, insurance company managers who get free paint jobs for their own, personal vehicles.

Where there is a system that can be cheated, there will be cheats who will do the cheating. The easier it is to cheat, the more cheating will be done.

See, if a lawyer is involved, the lawyer must also be duped. Lawyers are bound by very strict ethical rules. Standard contingency fee contracts between the lawyer and client specifically provide that a lawyer may withdraw his or her services if asked to do anything unethical, with the client having to pay for the lawyer’s wasted time at his or her hourly rate.

As an officer of the court, a lawyer is absolutely forbidden from allowing a client to give false evidence and must withdraw from the case forthwith if a client does so. Totally aside from ethical considerations, a lawyer working on a contingency is never going to risk a case going entirely down the toilet after putting tens of thousands of dollars worth of time into the case, which would happen if a client’s dishonesty were uncovered.

Lawyers are experienced in collecting and testing evidence. It’s what litigation lawyers do. Every consultation I have with my clients, however friendly, is effectively a cross-examination because I am continually testing, pushing and prodding what my clients tell me to assess how their evidence will stand up in court.

Over the course of my career, I have had to “fire” only two clients who betrayed my trust and had not been honest with me. As for the rest of them, I had my work cut out for me to counter the negative impact of the dishonest few and ensure that they did not get screwed by the insurance company.