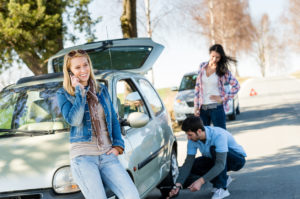 Here’s a “who are you” riddle.

A car stalls in traffic; you lend a hand to push it off the road.

A vehicle is stuck in snow; you help digging or pushing it out.

Someone needs a boost; you pull in and dig out your cables.

Who are you? You’re a Canadian! Most likely from Saskatchewan?

Is it something in the water? It feels good to lend a hand.

The stranded motorist is very appreciative and you go away with a song in your heart.

But what if something goes wrong.

You’re much too out of shape to be pushing a vehicle and herniate a disk in your back.

You slip and fall on the icy road and fracture your arm.

The battery explodes, the acid causing serious damage to your eyes (for instruction about how to safely boost a battery, please read The dangers of boosting a car battery).

Lending a hand can leave you with serious injury. Injuries can lead to income loss and other financial consequences.

Who is responsible for those consequences?

Let’s say the stranded motorist could not have been more “at fault” for becoming stranded.

He or she ran out of gas, got stuck by grossly overdriving icy conditions or drained the battery by blaring a huge aftermarket car stereo.

It doesn’t matter. It is the law of British Columbia that you alone suffer those consequences.

To illustrate a distinction in the law, I used examples where the stranded motorist situation was not a true emergency. The law is different if your motivation was to save someone from imminent danger.

The distinction was discussed by Madam Justice Russell in the case of Smith v. Tucker, 2007 BCSC 489.

Ms. Smith ignored the low fuel warning and “distance to empty” features of the Ford F350 she was driving and ran out of gas. As described by the judge, she then “…shifted the truck into neutral, got out of the truck, began pushing against the door frame with one hand and steering the truck with the other, with the door open.”

Mr. Tucker came on the scene. He jumped to Ms. Smith’s rescue and helped push the truck to the curb. The physical exertion caused Mr. Tucker to suffer a severed tendon in his leg. It was surgically repaired, but he was left with a permanent partial disability.

If a driver’s negligence “…has created some hazard, danger or situation of imminent peril to a victim or potential victims…”, he or she is responsible for injuries suffered by a good Samaritan who comes to the rescue.

In the case of Smith v. Tucker, though, Madam Justice Russel found that Ms. Smith’s stalled truck did not create a situation of imminent peril.

She noted that “there was no collision between any vehicles; no one suffered injury as a result of the truck stalling…other motorists were sensibly not attempting to drive past her vehicle…[t]he defendant was not trapped in her vehicle, nor was she rendered helpless by the incident.”

In the result Mr. Tucker was left to bear the full losses arising from his injury. He was not able to access Ms. Smith’s liability insurance policy for compensation.

Should this state of the law cause hesitation before you do the “Canadian thing” and help folks out?

A little hesitation is a good thing! It’s always best to calmly assess potential risks before diving in to do anything, including helping someone stranded on the road. Knowing that you will bear the full extent of your losses if an injury occurs will naturally lead to taking full responsibility and ownership for your own safety and greatly reduce the chance of injury.