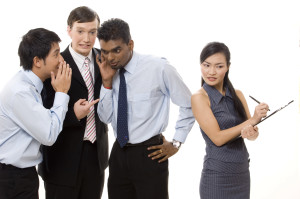 Do you remember high school? What a social stew that was! If you went to a large school, you had relationships ranging from acquaintances to best buddies among hundreds of fellow students.

The newer relationships hung by a thread. As time went on, they became stronger and stronger.

Do you remember what was most destructive to those tentative relationships?

Perhaps was it gossip?

Simply put, gossip is when information gets passed from one person to the next. One problem with gossip is that certain information, intended to be private, should not be passed on. Another problem is that verbally relayed information is notoriously unreliable. Not only is the context of the information lost, the content is lost as well.

This lack of reliability is illustrated in a game I remember from Cub Scouts. You line up a number of children and whisper a message in the ear of the first in line. That child whispers it to the next in line and so on. The message received by the last child rarely resembles that which was whispered to the first.

But this is a legal posting, not a social posting.

My discussion about gossip is to introduce one of the most basic rules of evidence.

The verbal relaying of information from one person to the next is just as destructive to the pursuit of justice in a trial as it is to budding relationships in high school. In recognition of this, courts have imposed tight restrictions on that form of evidence, which is commonly referred to as hearsay evidence.

What constitutes hearsay evidence is notoriously misunderstood. I end up having to spend a lot of time, when preparing witnesses for trial, trying to explain what information they are permitted to give and what information would be hearsay and therefore inadmissible.

It really should be quite simple.

Let’s say you are claiming compensation for injuries you sustained in a crash. A witness comes up and tells you at the scene that the offending driver stumbled out of his or her vehicle smelling strongly of alcohol.

You didn’t see or smell this yourself because you were paying your attention to your wife, who had sustained serious injuries. You jump to the reasonable conclusion, based on the limited information you have been given, that the offending driver had been drinking.

However much you believe it to be true, the court will not allow you to breathe a word about it at the trial. The only way for that evidence to get before the court is if the witness is called personally to give evidence at the trial.

See, the witness’s information cannot be tested by cross-examination if it comes from you. The witness needs to be there personally to face challenges to his or her evidence.

Perhaps the offending driver had been drinking alcohol. Perhaps there is another explanation for what the witness reported to you.

On cross examination, the witness may provide the context of what he or she saw and smelled. He or she may describe the gash on the other driver’s forehead, suggestive of a brain injury which could be responsible for the stumbling. He or she may also describe the previously unopened case of beer that was smashed during the crash, causing everything in the vehicle to smell of alcohol.

If you had been permitted to give the hearsay evidence, leading to the conclusion that the offending driver had been drinking, it would have resulted in a miscarriage of justice. It would have been a classic example of the lack of reliability of “gossip.”

On the other hand, if the offending driver really had been impaired, there would have been a similar miscarriage of justice if that evidence could not be put before the court because its only source was your inadmissible hearsay evidence.

Even though this is not a social posting, I will conclude by suggesting that we all follow the leadership of our courts and impose the hearsay rule into our own lives, thereby avoiding the destructive nature of gossip.