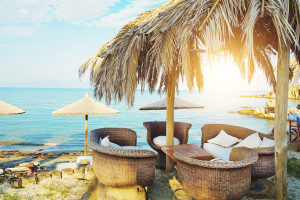 My wife and I are now veterans of the Mexican time share sales machine.

We stayed at two different, but related resorts.  Each of them gave us their best shot with their 90 minute sales pitch.

During the first “90 minute” encounter,  taking over three hours, we worked our way through three different salespeople, each with an increased command of the English language, sharper dress, and paler skin.

At the end of the marathon, I was pretty much sold.  Had they given us the opportunity to seriously consider the “investment”, they might have gotten to second base.  Having the opportunity to think is not part of their sales model.  My request to take overnight was flatly refused.

I was pissed off about the three hour waste of time, but that didn’t stop me from putting myself through yet another salesman for our second 90 minute encounter.  This time, I started with my mind closed.  We weren’t there to hear about the time share – we were there because they provided a cheap excursion in exchange for our time.

Wouldn’t you know it, though, this second package sounded even better than that first.  I found myself asking to see the paperwork.

The salesperson seemed a little taken aback.  What?  I wanted to actually read the contract?  This special request took a while for the salesperson to comply with.

I didn’t get through the first half of the first page without getting stuck.  The words on the printed page were simply not jiving with the words coming out of the salesman’s mouth.

I gotta hand it to them, they were very compelling.  At the ends of both pitches, the similar but differently packaged products looked mighty attractive.  They were at that “too good to be true” level.  It was like deciding not to sign up was throwing money away.

The deals were, indeed, too good to be true.  The clever packaging unraveled when carefully considered and the contract wordings didn’t match some of what was being promised.

The fact that I came close to committing leads me to wonder how many others must be taking the plunge.

It’s a heck of a thing: subjecting yourself to a carefully scripted sales pitch, delivered by some of the best in the business, and being asked to make a snap decision without legal advice.

My father would say “buyer beware”.

Sure, there was no gun to my head.  No prudent consumer would make the snap purchase decision without careful consideration and without all those verbal promises being clearly set out in a written contract.

Yet obviously many, many people make that snap decision.

Laws have, in fact, developed to protect us from ourselves in these circumstances.  The protection is a brief time frame to wake up to the reality of what you’ve done and get out of the deal.

In British Columbia, that time frame is 10 days.

I have no Mexican law expertise, but the research I’ve done leads me to believe that there is a similar law in Mexico.  If I got it right, the time limit is 5 days.  Mexican law would apply to a purchase made in Mexico.

I don’t know what technical steps must be taken within those time limits, nor whether it’s calendar or business days.  My suggestion would be to immediately hand deliver written notice of your intention to reverse the deal and then get urgent legal advice to find out whether or not that was sufficient.

Got cold feet after the time limit has expired?  An internet search will uncover companies willing to help you.  When I read through their internet sales pitches, though, I wonder if they might be just as bad as the time share salespeople!