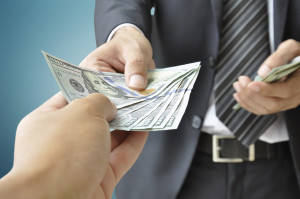 Disbursements do not reduce the amount of recovery a personal injury victim actually receives.  In the vast majority of cases, the defending insurance company must pay “costs” in addition to fair compensation, and those “costs” more than cover the disbursements.

In my personal injury practice, disbursements will typically be in the $5-10,000.00 range, though disbursements can be as little as a few hundred dollars and I’ve heard of disbursements exceeding $100,000.00.

Except in rare circumstances, the lawyer or law firm will pay the disbursements up front, as they are incurred, and will wait to be reimbursed until the insurance company pays the settlement along with the “costs”.

The question I am posing is who should pay to finance the disbursements.

I expect that most lawyers with full personal injury case-loads have paid for disbursements on their cases running hundreds of thousands of dollars at any given time.

The lawyer can pass the financing expense on to the client if a client agrees, as a term of a contingency fee agreement, to pay the lawyer interest on disbursements that have been incurred as the case progresses.

At the current state of the law, the insurance company doesn’t have to reimburse interest charged by a lawyer for disbursements, as part of “costs”.  Without reimbursement of that financing expense as costs, it’s a simple question of whether the financing expense comes of out of the lawyer’s pocket or out of the client’s pocket.

At a range of 8-24%, though, it’s unlikely that the lawyer is simply covering financing expense.  Banks provide unsecured line of credit financing in the neighbourhood of 5% nowadays.  At those interest rates, the lawyer has indeed entered the money lending business.  At hundreds of thousands of dollars, it’s a mighty good business at that.

I was recently asked to review the bill of a law firm that had charged interest on disbursements at 1% per month, which with compounding interest works out to 12.68% per annum.  The total interest billed was approximately $1,500.00.

The law firm had not issued any bills.

It took setting down a hearing date to have the bill reviewed, but the lawyer bucked up and reimbursed the interest.

I’m not in the business of reviewing other lawyers’ bills.  This was an exception made for someone near and dear to my 8 year old daughter.  Please, don’t call me to review your lawyer’s bill.

I wouldn’t let $1,500.00 of disbursement interest get in the way of hiring the best personal injury lawyer you can find, but you should carefully read the contingency fee agreement to look for whether or not the lawyer charges interest on disbursements.  If so, it’s fair and reasonable to discuss whose pocket the financing expense should come out of and, if it’s your pocket, whether or not the interest rate sought to be charged is fair.

If you are billed for interest on disbursements, have a look to see whether or not the billing was proper.

Published May 10, 2012 in the Kelowna Capital News