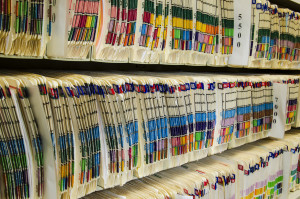 There is a crash.  There is pain, stiffness, headache or other symptoms.

If there were any symptoms in the time period leading up to the crash, we need to compare the two sets of symptoms, because it is only the new symptoms, or the increase of symptoms, that were caused by the crash.

We then look at how the new symptoms, or increased symptoms, have impacted and are continuing to impact on the person’s life.  Those impacts include actually having to endure new or increased pain, stiffness and other symptoms, a reduced ability to participate in enjoyable activities, loss of income or income earning capacity, and expenses.

It should be that easy, in theory, but it’s not.

The most significant complicating factor is clinical records.

Any time you see your doctor, the doctor makes some notes of the visit.  The same goes for therapeutic treatments such as chiropractic, physiotherapy and massage.  The chiropractor or therapist always makes some notes.

In theory, those notes should help, instead of hurt.  Unfortunately, those clinical notations are often used against injured victims to hurt, more than help, the pursuit of justice.

One problem is that doctors and treaters keep notes to assist in doing their job, which is treating the patient.  Rarely does that require taking a detailed inventory of all symptoms.  Often one symptom, of several, is the focus of treatment, and therefore the only symptom noted.  If back pain is noted, and not the chronic headaches, insurance adjusters point to that lack of headache notation to say that your headaches must have resolved.

Another problem is that people who are genuinely trying to get better, and who are respectful of doctors’ and treaters’ time, are unlikely to even offer a complete inventory of symptoms.  For example, if needing an antibiotic for an illness, a respectful injury victim is unlikely to say “Now doctor, remember I continue to suffer headaches and neck pain”.  Another example is if the headaches and neck pain are unchanging, and there is a worsening of back pain, a patient is likely to mention only the change in back pain.

Add to this the fact that there may be only 10-15 words jotted down for a discussion that lasts 3-5 minutes, and the strong potential for miscommunication and misinterpretation, and the defending insurer is given lots and lots of ammunition against you.

The worst of it is that our laws of evidence prohibit you from putting the clinical notations that help your case in front of the court, but allow the insurance company to do just that with those notations that hurt your case.

I am excited to report that the problem with clinical records is taking a turn for the better.  A recent court decision very articulately identifies these types of problems and dismisses, in that case, what was argued by the insurance defence to be inconsistencies in favour of the honest testimony of the injured victim.  If anyone reading this column is pursuing an injury claim, or knows of someone else struggling to achieve justice, point them to paragraphs 23 through 47 of Edmondson v. Payor, a February 1, 2011, decision of Justice Nate Smith, which I will happily e-mail to anyone who asks.