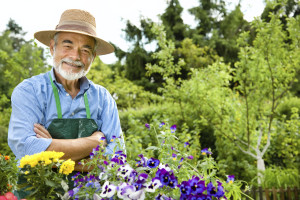 I write my column in the evening, in bed, with my laptop computer sitting on my lap. The television is often on, but I can ignore my wife’s choices along the lines of Grey’s Anatomy and Desperate Housewives.

This week, though, I was horribly distracted by Olympic highlights. How’s that for inspiring confidence that this column will be worth reading? So having said that, is it too early in the season to talk about gardening?

An ambitious fellow down the street from me, Jan Bath, is heading up the establishment of a community garden in our neighbourhood. My wife and several others have joined him on the board of a non-profit society that my office incorporated for the purpose.With board meetings sometimes held at my house, I typically grab a beer or two and join in.

You may wonder how many beers it took to give that topic any serious discussion? In case my attempt at humour is missing the target, I’ll explain that liability insurance primarily protects against injury claims.

What you may be scratching your head about is how anyone could be injured in a community garden, let alone due to the fault of the society operating it. I didn’t need to visualize how Rob up the road might break a nail while pulling a dandelion to recommend liability insurance protection for the society.

To most of us, a broken nail isn’t all that important. For Rob, though, it would ruin his entire week, and he’d probably pay extra to get into the beauty salon on short notice to get it filed down and repainted. Even if it’s a virtual certainty that the Court will find that it was Rob’s own fault for putting his nails at risk with such vigorous gardening activity, the lawsuit will cost a bundle to defend. We all know how ridiculously expensive lawyers are.

Remember, the insurance company pays not just for the claim, but also the significant expense to defend it. Sorry Rob. I just had to. Seriously, though, it’s not so hard to imagine an injury in a community garden.

How about the lawyer on the street who decides to help out by digging a deep hole so a tree can be planted. He heads back to the house to get something to mark the hole but is distracted by Olympic highlights on television. A gardener shows up, hoe in hand, expecting to be able to enjoy a bit of gardening without having to fear for her safety.

She goes straight to her plot and starts pulling dandelions. When she gets an armful, she walks them towards the compost bin, not noticing the deep hole because the armful of dandelions is blocking her view. She could easily suffer a serious injury if she falls into the hole.

An insurance company could say it was her own fault for not watching where she was walking. The injured gardener’s lawyer could say only an idiot would leave an unmarked, deep hole in the middle of the path on the way to the compost bin.

Regardless of who wins that argument before the court, it will cost tens of thousands of dollars in legal expenses getting there, which in itself makes the insurance worthwhile. When I’m required to give my evidence at the trial, I will acknowledge what an idiot I was and that injured victim of my negligence will be awarded fair compensation.

Rather than having an empty judgment against a non-profit society, the insurance company will pay for those losses. Sure, it costs a few dollars to have good insurance protection, but it’s worth it. Not only does it provide you with peace of mind that your own interests will be protected, but it’s also the responsible thing to do to ensure there are sufficient dollars to compensate an injured victim.