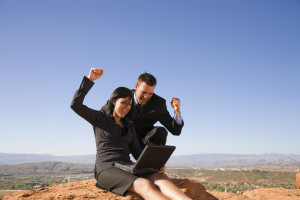 I like to root for the little guy. That’s a big piece of why I act only for injured victims against insurance companies in personal injury cases.

It’s hard to imagine a more classic David versus Goliath scenario— an ordinary citizen going toe to toe with a massive insurance company, struggling to achieve fair compensation for his or her injuries.

I have a different David versus Goliath scenario to share this week.

It is a case that I have handled for almost a decade. Justice has been very slow in coming, but it has been no less sweet.

Instead of prosecuting a claim, which I do with personal injury cases, I was defending against a lawsuit.

My clients, ordinary folk, were sued by a large corporation.

These folks, who were sued, put their faith in me, at the time a relatively junior, much more economical choice from a Westbank law firm.

The large corporation was making a claim against the family home.

As you might expect, along with the lawsuit came a whole lot of stress. A charge was registered against the title to the home, such that my clients were not able to sell or refinance their home as long as the lawsuit was outstanding.

The high-priced lawyers moved the lawsuit along through the litigation phases of exchanging relevant documents and examining my clients under oath, but then all went quiet.

The only way to end the stress and have the charge removed from title would have been to run a trial and ask the court to dismiss the claim.

Aside from being a very expensive step, there are always risks in litigation. And there was also the risk that the big corporation’s claim might succeed.

The only feasible option was to “let sleeping dogs lie.” And it was a very stressful option.

Any day, the lawsuit might have come to life, costing thousands more dollars in legal expense and forcing my clients to face the risk to their home.

The more time passed, the less likely it was that the sleeping dog would waken.

I remember my grade school math teacher who would say: “Patience is a virtue, possess it if you can. Often found in women, seldom found in men.”

Apart from the horrid sexism, there was wisdom in my teacher’s words.

There happens to be a legal principle that rewards patience. If you take the step of suing someone, you must prosecute the lawsuit with a reasonable level of diligence.

It isn’t fair for you to just sit back while the law suit hangs over the head of the person you sued.

If you fail to do so, the court can dismiss your claim for “want of prosecution”.

If you are the one sued, and you wait long enough, you can ask the court to dismiss the claim.

If you are successful, not only will the action against you be dismissed, but the party who sued you will have to pay your costs of defending the lawsuit.

That day has come for my clients.

A cheque for their costs is on its way from the large corporation, through their high priced Vancouver lawyers. David has slain Goliath with patience.

The little guy has prevailed. What a beautiful thing.