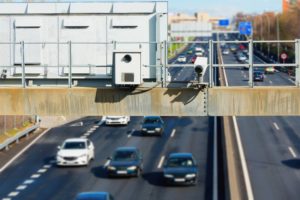 Bring back photo radar? I made that suggestion at the tail end of my last column, which was about speed traps.

Heck of a use of the word “trap”, by the way. The word is suggestive of unfair surprise.

You’d have to be asleep at the wheel to be surprised by being more than 10 kms/hour over a clearly posted speed limit. Isn’t that the cut-off?

Nobody’s pulled over for “slipping” by a kilometre or two. Or three. Or five. Or eight. Heck of a “slip” to get all the way past 10!

The same cognitive distraction that allows “slipping” more than 10 kilometres over the clearly posted speed limit causes the majority of crashes.

Please understand: I’m not saying that exceeding a posted speed limit is the problem.

Speeding just makes crashes worse. Much worse. Speed does kill, it’s just not what causes the vast majority of crashes.

Fully 50% of the car crash cases I handle are when a distracted driver fails to process a road hazard that is plainly visible through the windshield.

Not a shockingly surprising road hazard. Simply the slowing and stopping of traffic. Yes, fully 50% of car crashes I handle are where a driver crashes into the back of a stopped vehicle.

The “cash cow” success of speed traps is a clear indication of our horribly low level of awareness behind the wheel. It’s like a canary in the mine. If the canary dies, it’s likely unsafe down there. If drivers have trouble keeping their vehicles within 10 kms per hour of the speed limit, it’s unsafe out there!

No wonder ICBC liability insurance rates are so high!

If we could only raise the level of driver awareness. If we were to do so even up to the minimal level of keeping track of our speed, we would increase safety and decrease crashes.

How about more speed traps? Behavioural change requires consistent reinforcement. Speed traps around every corner would provide that level of reinforcement.

But that would be prohibitively expensive. We already spend a boat load of money on policing. We need our police to be spending their days catching bad guys, not holding radar guns.

If only there was a less expensive alternative.

If only there was some sort of monitoring mechanism that would automatically deliver stinging consequences when the mind wanders enough that a posted speed limit is exceeded by more than 10 kms/hour.

Governments are resistant to doing what’s right when “what’s right” will get them voted out of office. Come together, people. Let’s give our political leaders the strong message that bringing back photo radar will be good for votes instead of bad.