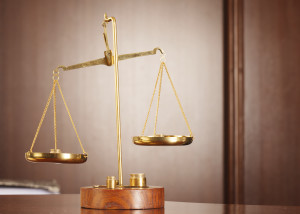 Last week, I told the story of a Canadian executioner who, in 1934, was using persuasive penmanship to get paid for his services. I concluded with the suggestion that you check out Small Claims Court if you don’t have the persuasive powers of an executioner.

This week, I will give you an idea of what Small Claims Court is all about. It’s a beautiful thing. Without spending a dime on a lawyer, you can launch a lawsuit for up to $25,000.

If you are successful in your lawsuit, you will end up with a judgment that is just as enforceable as a judgment of the Supreme Court of British Columbia. Armed with that judgment, you can garnishee a bank account, have a vehicle or other assets seized, register the judgment against title to a property or even ask the court to order the debtor to make payments under penalty of being thrown in jail.

It is a very simple fill-in-the-blanks document, with blanks such as “What happened?” and “How much?” There is a fee of under $200 that is charged at the courthouse when the file is opened. That fee is pretty much all you will have to spend, though. You can go right through to the end of a trial without paying any more money.

The process is wonderfully simple. You start by filling in the blanks of that notice of claim and taking it to the court registry to be filed. You then ensure it gets into the hands of the person you want to sue. That person, called the defendant, then has a deadline for filling out the blanks of another form, called a reply, where the defendant writes why he or she disagrees with your claim.

If a settlement cannot be reached, a trial will be scheduled. It will be another several months down the road. A Small Claims Court trial is a pared down version of a trial in Supreme Court. You will have to give your evidence in a witness box, having sworn to tell the truth, just like in Supreme Court.

Giving evidence simply means sitting there and telling your story. You can call witnesses, who will also be sworn in and give evidence. The defendant will do the same. The judge will likely play an active role to ensure the trial proceeds in a fair way. If you get nervous and are paralyzed with fear, the judge will help you along.

At the end of the trial, the judge will give his or her decision. You will be granted a judgment or your case will be dismissed. Unlike in Supreme Court, there are no nasty costs in Small Claims Court. If your case is dismissed, you will simply have to reimburse the defendant for his or her expenses incurred defending the lawsuit, which likely will be limited to the expense of filing the reply.

Considering paying a lawyer $200 to $300 to issue a demand letter? How about paying less to bring a lawsuit in Small Claims Court. There is absolutely no legal obligation to respond to a lawyer’s demand letter. But fail to respond to a notice of claim, however, and you risk the full force of the law being unleashed against you.