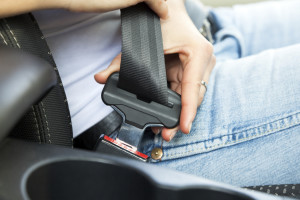 There is no dispute: seatbelts save lives.  Statistics clearly show that car crash deaths go down as seatbelt use goes up.

I buckle up every time I am behind the wheel and insist that everyone else in my vehicle do the same.  I preach to taxi drivers who tell me that they are exempt from seatbelt laws, saying that they should think more about protecting themselves and others in the cab and less about tickets.

Failure to wear a seatbelt puts yourself at risk along with everyone else in your vehicle because your unbelted body in certain kinds of crashes can become a lethal projectile.

Public awareness campaigns have successfully transformed our society from the old days when I was a child, playing unbelted on cushions in the back seat during long road trips, to the present day when it is rare to see anyone unbelted.

Buckling up has become second nature.  We feel naked until we have pulled the belt over the shoulder and clicked it in.  We think of anyone driving without a seatbelt as being careless, taking on a risk that could so easily be avoided.

There is another risk, though.  The other risk is the complacency that comes from a false sense of safety and security.  The notion that “If I am wearing my seatbelt, I will avoid a serious injury” is simply not true.

There are also types of collisions where the seatbelt will prevent impact injuries that would otherwise occur when your body is flung into the steering wheel and dash board, but will actually cause other injuries that occur because your waist and one shoulder are held in place while the rest of your body and head are free to fling around.

In rare circumstance, a seatbelt can actually kill you, if it holds you within a vehicle that sustains catastrophic damage.

Does it matter that there are some crashes and collisions where a seatbelt will do nothing to help or might do more harm than good?  In my view it should not cause you to second guess your second nature seatbelt use.  In my view, it’s just plain reckless and stupid (to use a word my wife is trying to get my father to stop saying around the children) not to wear your seatbelt.

It can matter, though, to the rights of an unbelted vehicle occupant who is injured in a crash that was not their fault.

British Columbia law says that if you share fault in the cause of an injury, you are not entitled to compensation to the proportion of that fault.  In other words, if an unbelted passenger is injured because the driver crashes the car, the defending insurance company will escape having to fully compensate the injured passenger if the use of the seatbelt would have prevented or reduced the injury.

This issue came up in the July 25, 2014, decision of Mr. Justice Grauer in Van v. Howlett.  Ms. Van was the front seat passenger of a vehicle that was T-boned at the rear driver’s side, causing the vehicle to spin counterclockwise, launch into the air, land on the passenger side, and then bounce back to an upright position.  Ms. Van was ejected from the vehicle.

The injuries were very significant, and the court assessed a valuation of fair financial compensation for her injuries and losses to be over $4 Million.

Mr. Justice Grauer found that the most serious of Ms. Van’s injuries “were caused by the massive and sustained force of the impact between her side of the vehicle and the road, which the seatbelt would not have prevented”.

The defence tried to argue that the court should conclude that the failure to wear a seatbelt would at least have lessened her injuries, even though there was no direct evidence of that.  They relied on statistical evidence that those ejected from a vehicle generally face a much higher injury exposure.

The court rejected that argument, citing the following quote from another case: “The statistical effectiveness of seat belts has not, however, in my view eliminated, or altered, the onus of proof in individual cases.  The onus remains on the defendant to show upon a balance of probability that the use of a functioning seatbelt would have avoided, or minimized, the injuries which were in fact suffered by the plaintiff.”

Yes, Ms. Van should have been wearing her seatbelt; we all should.  Our general perception and the statistical advantage seatbelts offer, though, should not get in the way of justice if in a particular crash it is not proven that the seatbelt would have made any difference.