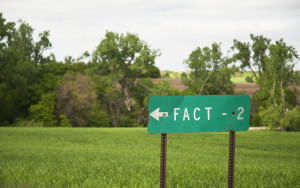 A teenage boy, a new driver, backs out of a parking stall. He is not paying attention and t-bones the driver’s side rear quarter panel of another vehicle, driven by an older woman, who was lawfully stopped directly behind him.

There is no damage to the rear bumper of the teenager’s car. That’s no surprise. Bumpers are built to withstand significant forces before there is any apparent damage.

The damage to the left rear quarter panel of the woman’s car costs $1,554 to repair. The woman is very upset about the damage to her car. Over the next few hours, though, the pain sets in and she realizes it wasn’t just the car that was damaged.

It didn’t seem like a significant crash but, of course, the sharp jolt to the driver’s side of the car was transferred to the driver.

Not only does the woman have to deal with the significant inconvenience of tending to the repairs to her vehicle, but she also has to deal with an injury. She hopes the injury will quickly resolve itself. The last thing she needs, at her age, is to develop a chronic pain condition.

Unfortunately, things do not resolve in the first few days as she hoped. The woman is advised by her doctor she should have some physiotherapy or other such treatments.

She lives cheque-to-cheque on a fixed pension. She cannot afford the extra hundreds of dollars per month that treatments will cost. She goes to the insurance company about a month after the crash to start the claim process for compensation for her injury.

Imagine if that woman was your mother or your grandmother. Imagine if it was you. Would you be angry? I would be livid. We all know that, in the real world, damage to a outside of a package is no indication of how much damage there might be to the contents.

A battered and torn package might contain perfectly fine contents. But contents can be destroyed when the packaging looks perfectly fine. The same goes for personal injuries in car crashes.

According to a Supreme Court judge in a case involving our own provincial auto insurance corporation: “I do not subscribe to the view that if there is no motor vehicle damage then there is no injury. This is a philosophy that the Insurance Corporation of British Columbia may follow, but it has no application in court. It is not a legal principle of which I am aware and I have never heard it endorsed as a medical principle.

“Significant injuries can be caused by the most casual of slips and falls. Conversely, accidents causing extensive property damage may leave those involved unscathed.”

From what I can tell from a recent posting on a local internet site, the story I told about the older woman is based on a true story. I am not about to salute the writer for exposing yet another example of insurance company unfairness, however. You see, the title of the posting was Bilking The System.

The writer, who father of the teen driver, further victimizes the woman by accusing her of being fraudulent for making such a “ludicrous” claim.

He blames her and people like her for driving our insurance premiums through the roof. The father is not entirely to blame for being so misled. He was fed propaganda by a representative of the insurance company. The representative apparently told him that ICBC found, in its investigation, that it was not possible for the woman to have suffered an injury from this “extremely minor” incident.

Well, that’s complete bunk. They were following their arbitrary and unfair “Low Velocity Impact” program that results in the unfair denial of countless meritorious claims.  Follow this link to Paul’s Low Velocity Impact column for a further description.

The representative apparently also told the father every single person involved in a minor collision submits an injury claim. Well, shoot. That’s about as tall a tale as I ever did hear.

I hope this lady doesn’t allow herself to be taken advantage of by an unfair policy. I hope she finds a lawyer prepared to go to court to ensure justice is done.

The lady and her lawyer will face an uphill battle, though. The insurance company will want a jury that is poisoned by propaganda, such as the bunk the father was fed.

I also hope that the father, who so ignorantly accused this crash victim of fraud, will somehow find out about this column and post an apology.