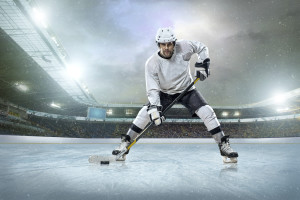 My blood is boiling again. But this time it is not about an insurance company. This time, it’s about idiots.

I have a very good friend who plays recreational hockey. He’s an older guy like me (over 20), though much better looking. He was hurt recently playing the game he loves. It’s not just that he was hurt, though.

Hockey is a physical game. It’s played on a very hard, slippery surface. The players wear sharp blades on their feet. In my friend’s recreational league, there is not supposed to be any contact but you can-not completely avoid it if you play the game right.

There are bound to be collisions when two or more guys are going after the puck. Some of those collisions are going to be at high speed and yes, they’re “old timers”, but they can still get around an ice rink.

Don’t bother suing the owner of the rink if you lose your balance on the slippery ice surface and fall on your keister. And don’t bother suing an opposing team member if he shoulders you into the boards while you both chase the puck.

There are other risks, though, that you are not choosing to take when you step out on the ice to play a game of Recreational hockey. You are certainly not choosing to take the risk that another player is going to come up from be-hind and slam against you, causing you to smash head first into the boards. What kind of idiot would do that?

Perhaps he gets in trouble when he smacks his wife around so he gets his fix by taking cheap shots playing hockey. Am I being harsh? It’s not the kind of manoeuvre that happens accidentally. It is a choice. A choice is made to put another player’s health at risk. A choice is also made to put the other player at risk of suffering a serious head or spinal cord injury.

Thankfully, it appears my buddy’s injuries are relatively minor. But that doesn’t make the other player’s actions any less offensive. That would be like being lenient on an impaired driver because nobody happened to get killed. My immediate feeling when my buddy told me his story was wanting to track down the idiot and pound on his head. But those feelings passed quickly.

Aside from my lack of imposing physical stature, that would just have given me similar idiot status. My next feeling was wanting to use our legal system to teach the moron a lesson. Unfortunately, my buddy is probably too stubbornly proud to give me the go-ahead.

I’m one of those rare Saskatchewan farm boys who never played hockey. But I sense that there’s something of a code among hockey players that would weigh against such a lawsuit. I wish that wasn’t the case. The more such a code gets in the way of idiots being forced to take responsibility for their actions, the more the idiots will feel they have a free rein to hurt others.

If you’re one of those idiots, consider yourself warned that you run the risk of someone like me coming after you with the full force of the law when you go beyond the love of the game. So start saving money to pay the lost wages of someone you seriously hurt.