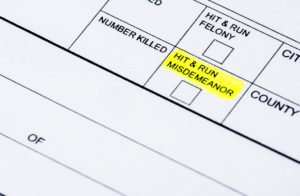 A quick internet search will take you to the hilarious “farting scene” in Rocket Man. Two astronauts in space suits are connected by a hose.  One astronaut’s space suit balloons up with gas pressure after the sound of a fart. A gas bubble slowly moves along the hose to the other astronaut who gasps and gags from the smell. The first astronaut says “it wasn’t me”.

It’s about as ridiculous as your four year old, confronted by a crayon drawing on the wall: “it wasn’t me”. Oh, ok then. I suppose it was Daddy who did that.

Avoiding responsibility for our actions seems to be a natural human instinct.

It is the most common challenge I’ve faced as an employer. I so highly value those who buck that natural instinct and accept responsibility without hesitation and defensiveness. How else do we learn, if not from our mistakes?

A particularly heinous example of responsibility avoidance is the “hit and run”.

It happens more often than you might think. Offenders have a split second choice to make: face the consequences or take off.

If driving impaired or without insurance, or a significant increase in your insurance rates would result, the chance of avoiding consequences might well outweigh the risk of an added charge for leaving the scene of a crash.

This is one area of the law where I’d like to see much stiffer penalties. I want that split second cost/benefit analysis to weigh heavily in favour of sticking around.

Sticking around can make a life or death difference to a critically injured victim. It can also make a significant difference to a victim’s ability to recover fair, financial compensation for injuries and losses.

When the negligent driver sticks around, compensation for the injured victim’s losses is paid by the offending driver’s liability insurance company.

What about in a hit and run scenario.

We are fortunate in British Columbia to have a protection that kicks in to provide compensation in hit and run situations. A victim must follow certain steps in order to qualify for that protection, though. These are steps that the insurance company is under no obligation to tell you about.

The part of the law that hit and run victims are often in the dark about is the legal onus to take “all reasonable efforts” to ascertain the identity of the unknown driver and owner of the offending vehicle.

Most people think it’s enough to report the incident to the police and ICBC, giving whatever information you have to assist them in their investigation.

It’s not enough. Innocent victims have had their claims dismissed for not doing more.

Post a notice in the newspaper or online news site, use social media, post notices on power poles at the scene. Ask witnesses to the crash itself, or anyone seeing a damaged vehicle matching your description, to come forward. Ask auto body shops to be on the lookout.

The odds of these efforts actually leading to the identification of the offending driver are slim to none, but that’s not the point.

The point is satisfying your legal obligation, because failure to do so could result in your entitlement to fair compensation disappearing.

Do you know of someone who has been the victim of a hit and run? Please enlighten them. It might not be too late for them to take these steps if they haven’t been taken already.