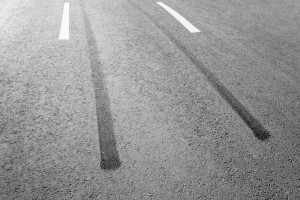 So much for 2010 being a banner year for Westside motorists.

It was three o’clock in the wee hours of Jan. 13. Jorden is on his way to work, riding a bicycle. He was on Main Street in Westbank and faces a green light at the intersection of Main and Brown Roads. There’s not a lot of traffic at that time of the morning, and even less of a police presence.

Perhaps that was why the driver of the truck on Brown Road decided to blow through the red light. Traffic lights and stop signs are for controlling traffic. In the deep black of the night with

virtually no traffic to control, they are nuisances, right? As long as you keep an eye out for cop cars, you can get home a lot quicker by ignoring them, right? Wrong, and wrong.

The truck broadsided Jorden, sending him flying a good 20 feet.

There’s a lesson for all of you who may subscribe to the “nuisance” theory of late night traffic lights. Please humour the rest of us and stop for those pesky red lights. What happened next is absolutely appalling.

Jorden suffered two broken ribs and a broken leg, but the truck driver didn’t know that.

For all he knew, Jorden was suffering from life-threatening injuries and needed to get to a hospital immediately. Instead of assessing the aftermath of his careless driving, the driver kept right on going, squealing around the corner, blowing the next red light and heading in the direction of Kelowna.

If that cowardly idiot wasn’t going to stop to see if Jorden was OK, at least someone else would. Right? Even though traffic was extremely light, there were still some vehicles on the road. In fact, five or six drivers ignored Jorden’s attempts to flag them down as he hobbled the couple of blocks to a gas station. What was that about?

Perhaps in his injured state, he appeared more like a drunk and less like someone who needed help. But are we that cold as a society that we wouldn’t err on the side of compassion? I bet he felt a little like the fellow whose snow-stamped SOS signs on the side of the mountain last year were ignored, leading to his wife’s death.

What if he had been suffering from life-threatening injuries? Jorden has been having a pretty rough time with Westide motorists. I wonder if it stopped there. I wonder if further insult would be added to injury. I wonder if he will be compensated for his lost income, the expense he  incurred for therapy and the pain and other impacts his injuries are having on his life.

Perhaps he was lucky and he suffered only fractures. More likely, though, he also suffered damage to the connective or, as the insurance industry likes to dismissively call them, “soft” tissues.

Those types of injuries can take so much longer than a few weeks to resolve. Sometimes, in fact, they never resolve.

Does Jorden know he is entitled to compensation under insurance provisions in British Columbia even though it was a hit-and-run and he has no idea who the offending driver was? I doubt it.

I don’t know Jorden, and I’m not assuming he’s dim in the head, but not many people know about the entitlement to unidentified motorist compensation in section 24 of the Insurance (Vehicle) Act.

The insurance company isn’t quick to point it out either. So please fill him in if you know him. And warn him that there are hoops he has to jump through in order to qualify and steps he needs to take immediately, such as taking all reasonable steps to track down the hit and run motorist.

I’m going to help him out with this column. If anyone has any information about a pick-up truck driver who drove through Westbank around 3 a.m. that morning, heading towards Kelowna, please contact the RCMP. As for Jorden, get some legal advice so all the i’s are dotted and the t’s crossed so you don’t get screwed out of fair compensation. Steps need to be taken right now.