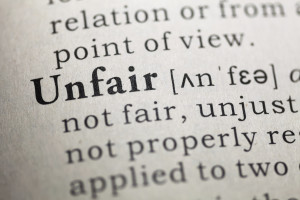 “It seems grossly unfair and against the public interest for ICBC to make representations to a claimant, leading him to think his claim had been accepted and that they were intending to offer him a settlement but, after the passage of time and without warning, tell him he has failed to meet the technical requirements of the Act depriving him of a settlement and denying his claim.”

Those are the words of the Honourable Mr. Justice Armstrong.  His decision in Springer v. Kee, released August 13, 2012, can be found on the Supreme Court of British Columbia website.  E-mail me if you have trouble finding it.

Mr. Springer pulled up behind stopped traffic at a stop light December 12, 2008.  A Hyundai driven by Ms. Kee smashed into the back of, and was wedged underneath, his vehicle.

Mr. Springer got out of his vehicle and walked back to talk to Ms. Kee, who denied fault.  She told him that her vehicle had been hit from behind, causing it to be propelled into Mr. Springer’s vehicle.

The offending driver had left the scene.  Mr. Springer hadn’t even been aware that another vehicle was involved until he was filled in by Ms. Kee.

No witnesses came forward at the scene.

Mr. Springer was injured in the collision.   The insurance adjuster determined that the damage to the rear of the Hyundai was likely accident related and processed his injury claim as a “hit and run” claim.  She gave him a pamphlet entitled “Helping You with Your Hit and Run Claim”.

The pamphlet advises to take all reasonable steps to identify the motorist who failed to stop.  According to Mr. Justice Armstrong, though: “The context of this comment is coupled with advice to report the matter to the police and to ICBC. The pamphlet does not mention the reason why the recipient should take steps to identify the other motorist; it could be construed as advising that reporting to the police and ICBC were sufficient steps. The document does not go that far but it does not alert the insured to the importance of taking the type of steps ICBC now alleges were necessary.”

Mr. Springer had reported the collision to the police.  He had understood that ICBC would deal with liability.

During the couple years following the collision, the adjuster called Mr. Springer at various times to inquire about the possibility of settling his claim.  The last inquiry was in mid-November, 2010, at which time Mr. Springer told the adjuster that his doctor had recommended waiting another six months to see if his ongoing symptoms would improve.

The first time Mr. Springer learned that there was any problem with his claim was when ICBC formally responded to the lawsuit he was required to commence within two years of the collision to preserve his claim.  ICBC denied the claim, alleging that he had failed to comply with section 24(5) of the Insurance (Vehicle) Act which required Mr. Springer to make all reasonable efforts to identify the unknown driver.

At the hearing, ICBC’s lawyer argued that in the months after the accident, Mr. Springer should have taken steps to follow up with the police, advertise in local newspapers or to post signs near the scene of the collision in an effort to find witnesses.

Of course, none of this was suggested by the adjuster.  Mr. Stringer was never alerted that failure to take such steps might invalidate his claim.

Mr. Justice Armstrong found that the law does not require ICBC to alert an injured victim about the requirements of section 24(5) of the Act and that the law did not permit him to consider the actions of the ICBC adjuster when determining whether or not those requirements were met.  Recognizing the unfairness, but finding his hands tied by the law, Mr. Armstrong reluctantly dismissed the claim finding that there were reasonable steps that Mr. Stringer could have taken.

In Mr. Justice Armstrong’s words: “It seems to me that, notwithstanding the unfairness to the plaintiff who has indirectly relied on ICBC to ascertain that he has complied with the Act as evidence that he was not required to take further measures to perfect his claim, Mr. Springer has not taken the steps required after the accident under s. 24(5) of the Act to find the unidentified motorist.”

ICBC gets off on a technicality.  Mr. Springer’s injuries go uncompensated because he put his trust in the insurance adjuster.

This case highlights the stark reality that ICBC has zero legal obligation to fairly fill you in about your rights when negotiating your claim.  This is the case with all claims, whether or not there is a hit and run.

Their “building trust, driving confidence” message that they recently successfully fought in court to force their employees to include on all their correspondence is helping lead injured victims to believe the contrary. As taxpayers and payors of insurance premiums in British Columbia, we are helping pay for that misleading branding.