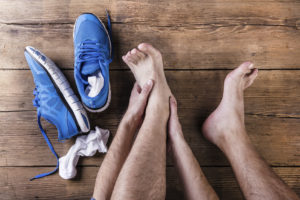 Writer in a Triathlon!

I was inspired to do a sprint distance triathlon last summer.  Jake Van Allen, a triathlete who articled with my firm, was my inspiration.

The name of this miniature triathlon fits for real triathlete’s like Jake who are capable of the full distance and are truly able to sprint through the miniature version.

For me, the 750 metre swim, 20 kms bicycle ride and 5 kms run are together a goal of marathon proportions!

I have been training for a repeat performance this year.

A huge thank you, by the way, to Pushor Mitchell, the incredible number of volunteers and the other supporting organizations who contribute to making the Apple Triathlon, and other local triathlons, a reality year after year.

The goal of completing my first triathlon, however miniature, motivated me to get a whole bunch of exercise I would not otherwise have gotten.  I became healthier, lost some weight, and felt better about myself overall.

This year, my “training” has not been going all that well.  I had trouble making regular exercise the priority it should have been this past year.

When I finally kicked into gear, it was “too much too fast”, resulting in the kinds of injuries that might tend to occur when a mid-40s, overweight fellow gets his running shoes on for the first time in months.

For the most part I was able to conceal the injuries.  Nobody wants to be perceived as a “whiner and complainer”.  They did interrupt my already delayed training, though.

When my Achilles tendons were painful, each step I took hurt, but only the most observant ones in my office noticed a slight limp.

The other day, cramming in my training while camping, I suddenly developed an intermittent, though very sharp, lower back pain.  I managed to hide that from my family until I had to explain why I wasn’t joining in on some sort of tag game with the kids.

Each of these set-backs were short term.  The injuries resolved and I will be going the distance this coming weekend, however unprepared!

The set-backs gave me a pinhole view of what life is like for my clients.

Instead of being short little set-backs, though, my clients’ injuries have become chronic.  They have to face a permanent, not temporary, “interruption” of certain activities.

The motivational and health benefits I have had taking on a brand new activity like a triathlon are not as available to them.

They, like me, carry on with their lives doing their best to keep this or that pain or limitation to themselves.  To those around them, they seem perfectly fine.

The chronic, invisible symptoms don’t stop most of them from going to work and carrying on with their day to day lives.  The stiffness and pain are simply constant reminders of their injuries that slow them down a bit and take away some of life’s “extras”.

Here’s the real kicker, though.  My own lack of physical fitness and the “training injuries” I developed were my own fault, caused by choices I’ve made and procrastination.

My clients, in contrast, were the innocent victims of inattentive drivers.

Adding insult to injury, they often face cynical skepticism about the very injuries they have been saddled with.  The collisions that cause chronic symptoms often appear to be minor, and the injuries themselves don’t show up on x-ray and other medical scans.

I plan on participating in another miniature triathlon next year.  I hope to motivate myself to maintain my renewed exercise over the entire year so that I can gear up, symptom free, and be properly prepared that next time.

Please if we could all do our part of simply turning up the attentiveness dial of what is going on through the windshield in front of each of us so that this opportunity that I have is not taken away from others.