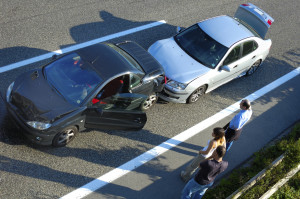 A number of hit and run crashes this past weekend made the news in the Lower Mainland, and an ICBC psychologist and lawyer were consulted as part of the news story.

We can add at least one hit and run in our own backyard to the list.

On Friday afternoon, approximately 4:45 p.m., a woman heading westbound on Highway 97 pulled up behind stopped traffic at the intersection with Westlake Road.  Her van was rear-ended and the offending driver didn’t stick around.

Please give me a call if you witnessed the collision.  I’ll put you in touch with the injured victim.  I’m sure the RCMP would appreciate hearing from you as well.

It’s bad enough that the offending driver cared so little that he or she failed to notice the stopped traffic.  That level of social irresponsibility was compounded by not accepting the consequences of that failure.

The ICBC psychologist in the Lower Mainland media report had a recommendation for avoiding hit and run behaviour.  He recommended that you “kind of plan for it”, putting your mind to what you would do so that you are not left with relying on gut instinct if it occurs.

A lawyer was also consulted, whose advice was to do the right thing as soon as you have calmed down if you flee the scene of a crash.  Taking responsibility, even after the fact, is said to improve your chances in front of a judge.  Hit and run is a criminal office, by the way.  Paying so little attention to your driving that you smash into the back of stopped traffic is not.

Smash away, but stick around to avoid consequences.

There’s something problematic about cajoling a hit and run driver to do the “right thing” by appealing to his or her self-interest.

There’s also something problematic about planning for a crash.  How about instead planning not to crash.  The best way to avoid hit and run behaviour is to avoid the “hit” in the first place.

Fortunately, innocent victims of hit and run drivers have a recourse to fair compensation for their injuries and losses in British Columbia.  There is a technical difference, in that the claim is directly against ICBC, but of course the practical reality is that a compensation claim is regularly against the offending driver’s insurance company.

I have written before that there is a requirement on hit and run victims to try to find the hit and run offender.  Failure to do so, even though there may seem to be zero prospect of success, will allow ICBC to wiggle out of the claim, and the case law indicates that “wiggle they will”.

Post notices near the scene, follow up with the police, and call a newspaper columnist like me who can include a “call for witnesses” in his or her column to help you out.