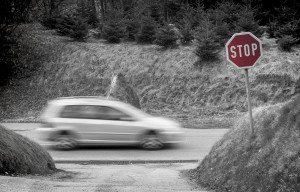 I got a chuckle from one of my favourite ICBC defence lawyers this past week.  I like him because he is a true gentleman whose integrity and credibility are beyond reproach.

We got to chatting about car crash prevention during a break at an examination for discovery.

My chuckle came from advice that Don would like to share with motorists about making left turns at traffic light controlled intersections.  He was talking about that classic scenario where the left turning driver pulls into the intersection on a green and waits for a break in oncoming traffic.

Put yourself in the place of the left turning driver.  You’ve been there countless times.

The break in traffic you are waiting for doesn’t come.  The light changes from green to yellow.

You know that in a couple seconds the light will change from yellow to red, and cross traffic will get the green.  You are anxious to clear the intersection before that happens.  Cross traffic will blare their horns if you’re still there when the light changes.  Worse, there will be a collision that’s your fault because cross traffic will have right of way.

You remember the advice your father gave you: Don’t hesitate.

The moment you see the light change to red, you hit the gas to complete your turn and get out of the way.

You have the right, under the law, to expect other motorists to be law abiding.

If an oncoming motorist is not obeying the law, however, you will be broadsided by thousands of pounds of oncoming steel.

Perhaps your father’s advice should be followed in other driving circumstances.  For example, it is best not to hesitate before slamming on the brakes to avoid running over a child who has stepped off the curb in front of you.

In the left turn scenario I’ve given you, though, Don would encourage you to hesitate.

What do you think will happen if you are still sitting there when the light goes green for cross traffic?  Is the lead vehicle likely to leap out of the starting gates and smash into you?

Sticks and stones, and being broadsided by an errant motorist, will break your bones, but an impatient honker won’t hurt you.

Don goes so far as to say that you could stop and have lunch.  That’s what gave me the chuckle.

However ridiculous it sounds, he’s right.  I’d prefer that you stop, pull out a sandwich, and eat it rather than automatically hit the gas on seeing the red light.  Relax; take a deep breath; wait until you see stopped vehicles in each of the oncoming lanes before you proceed.

If there’s an oncoming lane without a stopped vehicle, slowly edge forward until you can see down the lane enough to ensure that an oncoming red-light-blower isn’t going to fly out of there and hit you.

Even though the red-light-blowing motorist is the one technically at fault in a left turn crash, every one of those crashes would be avoided if the left turning driver stopped to eat his or her lunch.