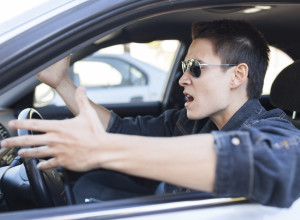 I don’t derive sadistic pleasure from picking on my friends.

From time to time I stumble upon a column topic when a friend shares a driving experience with me.

The views I express in my column are not always complimentary about the friend’s driving behaviour, nor driving attitude.

It doesn’t happen often enough, I don’t think, that those close to me are cautious about what they share with me in casual conversation.

While I am not shy about naming names in my column, I do protect a friend’s identity when using them for column topics.  Only those close to me could figure out who they are.

I’ve got a bit of an exception this time, and I confess that I’m feeling a bit nervous about it.  See, even without actually naming her, by referring to her as “my wife” I am considerably narrowing who I could be referring to.

Totally aside from the prospect of having to set up a mattress in the shed for a few days, I rely quite heavily on my wife to help me brainstorm column topics and I’d hate to do anything to compromise her willingness to continue doing so.

It was exactly in the context of trying to be helpful when I got the call.

She was calling from her vehicle.  Yes, hands free, but she knows my opinions about that.  Talking on a cell phone while driving is dangerous, regardless of whether or not you are using a hands free device.

And yes, it is different from talking to someone who is in the vehicle with you.  Do some research on the subject if you don’t believe me.

She had called excited about having a column topic for me, though I don’t know if her tone of voice at the time could better be described as “irritated” instead of “excited”.

“You should write about the danger caused by people driving too slow and causing road rage”.

My wife had been following someone driving 40 kms/hour in a 50 kms/hour zone, the slow driver clearly unsure of where he or she was going, slowing at intersections to read street signs.

She had been sufficiently irritated by the slow driver to use the expression “road rage” when suggesting the column topic to me, though I trust that she had been able to contain her feelings so as not to result in any road rage driving behaviour.

Can you see how I could not resist this column topic?

Driving 40 in a 50 zone is not dangerous.  Allowing yourself to become agitated because you are held back from driving the posted speed limit: now that’s dangerous.

I brought up my wife’s suggested column topic with friends a few evenings ago, to tease my wife.  A friend told of recently seeing a pick-up truck riding the back wheel of a scooter that was at its full speed, 70 kms/hour, in the fast lane between Kelowna and Westbank.  The scooter had temporarily gone into the fast lane to pass even slower traffic.

The pick-up driver was irritated by being temporarily held back from the typically 90 kms/hour plus flow of traffic along that stretch of highway (posted limit 80 kms/hour).  He showed his irritation by putting the scooter driver’s life in danger.

What is it that leads many of us to have those intense feelings of irritation when another driver temporarily holds us back?

More importantly, how can we ever allow those feelings to cause us to behave in such dangerous ways?

I challenge us all to be conscious of feelings of impatience and aggravation when driving.  Consciously recognizing those feelings as they come on might be a good first step.  As they arise, perhaps we can consider rationally how irrational those feelings are!

Perhaps a local psychologist might step in with a letter to the Editor.  I can see the problem, but I have zero psychological expertise to recommend how to fix it!  Perhaps some group counselling sessions might be in order.