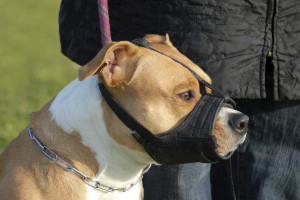 A pit bull attacked the two dogs.  The pit bull was known to dog control authorities, having a past history of aggression towards other animals as well as people.

When the RCMP and dog control showed up, the pit bull owner reportedly greeted them with an obscene hand gesture.  As if pit bull owners needed that added hit to their collective public perception.

It’s unfortunate that the mother, and children, had to witness their pets being mauled.  Hopefully the pets’ injuries will heal in due course.

“Unfortunate”, though, doesn’t begin to describe what could have happened if the target of the pit bull’s attack had been the children instead of the other dogs.

According to statistics I dug up from our neighbours to the south, dog bite injuries to children aged four and younger are to the head/neck areas 65% of the time.  When a pit bull latches on to a child’s face the child is left with, at a minimum, a horrible combination of physical and emotional scaring.

Incidentally, American statistics also show that pit bulls account for 42% of fatal attacks against human beings.  Given the fact that pit bulls represent a small percentage of the total number of dogs, that’s an alarmingly impressive statistic.

Add this particular pit bull’s history of aggression towards people as well as animals, it was just rolling the dice luck that the children were spared.

On my review of local dog control bylaws, penalties to the owners of dogs that behave viciously do not seem to “fit the crime”.   Impound fees for a dangerous dog start at $500.00, and fines cap out at $200.00.

Clearly, bylaws were insufficient to cause this dog owner to take necessary precautions to ensure that his or her pit bull, with a history of aggression, didn’t have the opportunity to strike again.

This is where the civil law might fill an important gap.

Under our civil law, a dog owner can be held accountable to the victim for a dog attack.  That accountability can include both financial compensation for the losses suffered by the victim as well as a financial punishment, known in legal circles as “punitive damages”, if the dog owner’s conduct is so egregious it is worthy of punishment.

One way to achieve civil accountability (liability) for a dog attack is by proving the elements of a legal doctrine called “scienter”.  Scienter is made out if the victim proves that the dog showed a propensity to cause the harm that was caused; and the owner knew of that propensity.

Normally, a dog must have some history of aggressive behaviour for scienter to apply.  One judge has summarized that requirement by saying “every dog is entitled to one bite”.

A recent case out of Kamloops (2009), however, held that the one free bite is not available if the dog is a cross breed with a wild animal such as a wolf.  In other words, the owner of the Malamute/wolf cross in that case was found liable for an attack even though the dog had never before shown aggression.

I wonder whether or not evidence of the significantly higher incidence of pit bull attacks, in comparison with other dogs, might lead our Courts to treat pit bulls like they treat cross breeds with wolves.  If so, pit bull owners would be liable for an attack even if the pit bull had never before shown any aggression.

Would that be fair?  Quite frankly, I happen to think fairness would extend to enacting legislation that would make all dog owners financially accountable for attacks by their dogs, regardless of breed and regardless of the dog’s past history.

Money talks.  Financial accountability is a powerful tool in our legal system to encourage responsible behaviour.  Why not leave the risk of a dog attack on the dog owner who made the choice of owning a dog, rather than pass it on to an innocent child on the street?

I have never handled a dog attack case, but I know of excellent lawyers who have and I would be pleased to refer you accordingly.  I would also gladly e-mail you copies of the materials I reviewed for the purpose of writing this column.