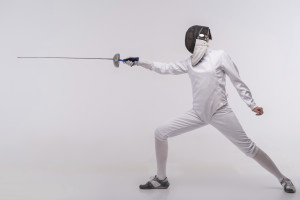 Negotiating an injury claim directly with an insurance adjuster can feel intimidating.

It should. You are facing a seasoned fencer, the likes of Inigo Montoya in The Princess Bride who dedicated his life to the study of fencing so as to avenge the death of his father in a duel with “the six-fingered man”. In his hand is a magnificent sword.

Not so bad if you are the “man in black”, with even more impressive training, armed with a similarly impressive sword.

You are not, though. You stand there bravely like the Black Knight in Monty Python’s The Holy Grail, claiming to have “but a scratch” after his arm is lopped off.

Your negotiating position is hampered by two critical factors: One, you don’t know what amount of financial compensation for your injuries and losses would be fair; two, you have no means to force that compensation out of ICBC. Without having a clear negotiation goal, and holding a wet noodle instead of a sword, you are basically “cap in hand” hoping that ICBC will voluntarily provide a fair offer.

It doesn’t matter how brilliant a negotiator you might be. With such an impossibly weak negotiating position, you haven’t got a hope.

If you follow my advice, a relatively new ICBC tactic could result in less, instead of more, unfairness in the settlement of injury claims. The tactic involves the use of a document ICBC calls a “Claim Payment Proposal”.

The way it works is that you and the ICBC adjuster have your negotiation to the point of reaching ICBC’s highest, best offer. Instead of requiring you to sign away your legal rights, which is something that might push you over whatever threshold that has been holding you back from consulting a lawyer, they pay you the settlement amount with no strings attached.

All you have to do is to sign the Claim Payment Proposal form, the only legal effect of which is to acknowledge receipt of the money.

The wording of the form carries on the charade that ICBC tries to portray in the negotiation of personal injury claims, i.e. the charade that they are being fair with you. The form even starts with the words: “This payment is being tendered by ICBC as a fair and reasonable assessment of the above-noted claim”.

It is the cherry on the top of the ice cream sundae that they have been building since their very first discussion with you when they told you that a lawyer would be unnecessary and bent over backwards to try to keep you happy so as to not give you any reason to seek legal advice. It is the culmination of mass marketing of their brand: “building trust, driving confidence” that we all pay for with our insurance premiums.

I find it so offensive that they don’t tell people the truth, i.e. that when negotiating your claim they are doing so not as your insurance company, but as the insurance company defending the negligent driver who cause your injuries and who is likely completely unaware of your ongoing symptoms.

My advice? Sign the form and cash the cheque. Then, please simply spend the hour it will take for you to have a free consultation with a seasoned fencer armed with a gleaming sword, a consultation that can occur by telephone from the comfort of your living room couch.