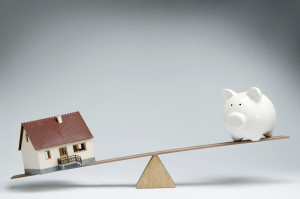 In the previous posting, I explained why I believe the stage has been set for the perfect storm in foreclosures. The tendency to repeatedly refinance debt in a rising market becomes suddenly impossible when the market tanks.

Historically, low interest rates have encouraged mortgage borrowing; and there has been rampant real estate speculation with people trying to make a quick buck.

I tried to correct some misunderstandings about foreclosures, pointing to laws that have developed to ensure fairness and, in doing so, I discussed a scenario where the amount of the mortgage is less than the value of the property.

I referred to the typical six month grace period, as well as the fact that a mortgage company will not be able to keep your equity in the property if there is money left over after the mortgage is paid out.

A reader emailed me a question related to that posting. He wanted to know what happens if the amount owing to the mortgage company is greater than the value of the property.

Specifically, he wanted to know if the home owner is liable for the difference if the house is sold and the mortgage is only partially paid off with the sale proceeds.

It is a good question, particularly if you come from Alberta, where the law on this point is very different.

New, high ratio mortgage financing, with little or no money down, will cause this scenario to happen more than ever before.

Let me give you a fact pattern as a framework. Fred and Wilma bought a house in 2006 for $400,000. They didn’t have enough money for a down payment, but their mortgage broker was able to find them a high-ratio lender and they were able to purchase the house without a down payment. Their mortgage was $400,000.

October 2008 comes along and Fred, a quarry worker, is laid off due to the reduced demand for rock fireplaces in the tanked real estate market.

Fred and Wilma are unable to sell the house at a high enough price to pay out the mortgage because the house value tanked with the rest of the market.

After two years of mortgage payments, Fred and Wilma have shaved only $7,000 off the principle amount of the mortgage because they opted for a 40 year amortization. They still owe about $393,000.

If the mortgage company chooses this option, the debt against Fred and Wilma disappears.

This may seem unfair. Fred and Wilma lost their house but they remain liable for tens of thousands of dollars in mortgage debt.

The other perspective is: Why should the mortgage company have to swallow that loss? You may not be aware that it’s not uncommon for the source of mortgage financing to be regular folks’ retirement savings.

Practically speaking, however, Fred and Wilma are likely to walk away from the debt in this scenario as well.

If they have insufficient assets to refinance the mortgage and keep it out of foreclosure, they are likely excellent candidates for bankruptcy.

However—and this is a big “however”—if you used fraudulent means (i.e., lied) to obtain your mortgage financing or otherwise acted fraudulently in your dealings with the mortgage company, the claim against you may well survive bankruptcy.