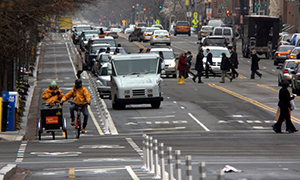 How do you feel when you see a cyclist or pedestrian with no apparent concern for his or her own safety?

A cyclist continuing to ride on the paved portion of the roadway instead of pulling over to the gravel to let you pass;  A pedestrian walking, so it seems, blindly into a crosswalk ahead of you.

Picture it:  You are driving down a street.  There is a crosswalk ahead.  A pedestrian, a young fellow, is approaching the crosswalk from a walking path on your right.

The pedestrian could pause for just a moment and let you pass by without so much as touching your brake.

He could, but he doesn’t.  Instead, he steps onto the street directly in the path of your vehicle.

You have to slow your vehicle and stop to avoid mowing him over.

What are your feelings?  Think honestly about it.

Are you feeling a degree of irritation towards the pedestrian?

What if there had not been enough time to stop?  What if you hadn’t been paying close attention to the road?  What if his failure to heed your approaching vehicle had resulted in you mowing him down?

Do pedestrians have a death wish?  Aren’t they aware that they don’t stand a chance against 3,000 pounds of rolling steel?  If they would just keep a vigilant eye out and keep out of the way of vehicles, no-one would get hurt.

I doubt that 78 year old Mile Miljkovic had a death wish when he was mowed down in a crosswalk on Springfield Road in Kelowna on September 25, 2012.  Whatever his wish, he succumbed to his injuries and died in the hospital the following morning.

Rather than pointing fingers at the pedestrians and cyclists, common sense, common decency, morality and yes, the law, impose a much higher onus on the motorist piloting those thousands of pounds of steel to take care for the safety of others.

The reality is that if motorists would give driving the care and attention it deserves, no-one would get hurt.  Vehicles do the maiming and killing.  Pilot those motor vehicles responsibly and we virtually eliminate injuries and deaths on our roadways.

For some reason, we have trouble taking that responsibility.  We point the finger so many directions instead of at our own selves.  We blame the roads; we blame the weather; we blame snow and ice; we blame traffic light configurations.  We even blame the victims.

A media report of another mowed down pedestrian, this time on November 1st, 2012, in Armstrong, included the following: “Witnesses say the young man was already half way into the crosswalk when he was hit, however, indications are he began crossing without ensuring no vehicles were coming through.”

Gotta love the “however”.  If the young man was half way into the crosswalk, any motorist paying attention would have had time to stop.

The “however” is a victim-blaming insult to the young man who had the right of way if the witnesses are to be believed.

By the way, section 183(3) gives cyclists the clear right to ride on the paved portion of the road, rather than having to pull over to the gravel.  Keep that in mind the next time you feel irritation as you pull up behind a cyclist.

Instead of feeling irritation about the conduct of vulnerable pedestrians and cyclists, we need a kick, or several kicks, in the arse until we feel strong irritation at ourselves, the motorists who are directly responsible for the injuries and deaths on our roadways.