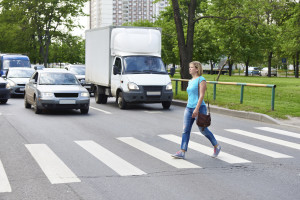 The headline screamed off the page at me.

As a lawyer who dedicates his practice to pursuing the rights of victims, the head line struck me as a classic.

Why is there such a strong societal urge to blame the victim?

Those who study the way juries make decisions have theorized that it is psychologically easier to blame the victim.

By coming to the conclusion it was her own fault for being hit by that car and suffering injuries, we get to go about our day feeling safe.

We won’t suffer the same fate as long as we are simply careful about our own conduct.

Alternatively, accepting that the injuries were caused by a careless motorist exposes us to the reality that we don’t really have control.

This reality, and I assure you it is reality, is a very uncomfortable one.

I wasn’t there. All I know is what I learned from the newspaper article. But there was a crosswalk. Not one of those difficult-to-notice crosswalks. It was the kind equipped with amber lights that can be activated by a pedestrian pushing a button.

The vehicle in the slow lane was able to stop. That’s the lane immediately alongside the curb.

It’s also the lane that the 14 year old girl darted into. She was hit by the vehicle in the next lane.

I can’t imagine how it could have been verified but an RCMP officer noted the vehicle that struck her was travelling at the posted speed.

The language he used describing the incident took responsibility away from the driver. The officer was quoted as saying the driver was not able to stop.

Please be very, very clear, I am not making a judgment call with regard to who was at fault in this particular, unfortunate incident.

I am simply stating the facts as noted in the newspaper article and suggesting that the theme arising from those facts ought to have been: that motorists should be more vigilant about pedestrians and not blame the victim. The incident reminded me of research I did some time ago.

I was working on a case where another young person was injured after being struck by a vehicle.

One of the cases I dug up in my research was a case decided by the B.C. Supreme Court in 2003.

A quote from the judge who decided that case is particularly applicable to the circumstances noted in the newspaper article.

“In my view, in approaching a marked crosswalk in anticipation of crossing through it, a motorist assumes a heightened duty to take extreme care and maintain a vigilant lookout for those who might be in the crosswalk.”

As for travelling at the posted speed limit, we drivers are not legally entitled to drive faster than is safe in the circumstances, regardless of the posted limit.

Another quote from a different case says:

“It is therefore my opinion that Mrs. Aubin was negligent in driving at too great a rate of speed in the circumstances. The fact that, had Mrs. Aubin been driving at the posted speed limit of 70 kilometres per hour, she would not have been able to get stopped before the collision, does not lessen or excuse her negligent conduct.”

Then there’s the point that one of the two parties to this incident was driving a 3,000 pound vehicle and the other was on her feet.

A quote from the B.C. Court of Appeal:

“…the driver’s carelessness was fraught with much greater risk of harm than was the plaintiff’s and responsibility should be commensurate with the degree of harm.”

The RCMP officer was quoted offering a reminder to pedestrians to respect the fact that vehicles cannot stop instantly.

So, please, pedestrians, do take that to heart. But motorists, take the words of the judges to hear as well.

If you cannot stop your vehicle in time to avoid mowing down a pedestrian at a clearly marked crosswalk, you are driving too fast.