Thank you. And goodbye. At least for now. 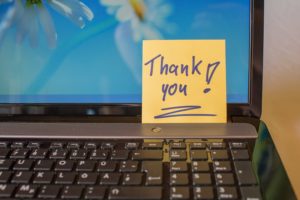 It’s another Saturday morning as I settle down for the two-four hour process of column writing. A weekly process that has repeated itself since the beginning of January, 2007, when I started writing for a Westside edition of the Kelowna Capital News.

It adds up to one year of full time writing.

It helped that her suggestion came at the end of another 55 hour work week.

My initial spark of writing passion was about shining a bright light on the shadowy world of ICBC and other personal injury claims.

It didn’t take long for road safety topics to work their way in.

I have the unique opportunity to investigate the causes of crashes and collisions that result in lifetimes of consequences.

Car crash causes are commonly labeled for the traffic rule that was broken, i.e. failing to yield, failing to stop for a stop sign, etc. But when you really dig into it, you realize that the root cause is inattention.

Drivers don’t purposefully pull out from stop signs in the paths of other vehicles. The fact is that they don’t see the oncoming vehicle that’s there to be seen because of “inattention blindness”.

The more I put my mind to it, the clearer I saw the problem and could identify solutions. And the more I became convinced that I could help steer road safety policies in the right direction.

This column was my pulpit.

ICBC claims are going the way of the dodo bird and I admit defeat on the road safety front.

I have enjoyed writing about other topics from time to time. But it’s been more about “coming up with a topic” than the words flowing from my passion filled fingers.

I am so very, very thankful for the opportunity I have been given to share my ideas. And for the many who have reached out to me over the years with encouraging comments.

Special thanks to my wife who has tolerated the time I have taken away from our family. To my father who has given me grammatical correction and encouragement since the beginning. And to my wife, Jess and Sara-Jane who have so very kindly read and provided their feedback on each of my drafts along the way.

So I’m hanging up my keyboard. At least for now. Perhaps when my work week is shaved down and I regain a writing passion I’ll want to return. And perhaps there will still be a media platform willing to publish what I’ve got to say.