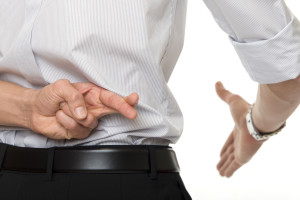 This is the second column of a series I am writing to expose common arguments that some insurance adjusters make that are so lacking a foundation in logic, science and law that I consider them an attempt at cheating.

This one has to do with a willful blindness to the scientific reality that a percentage of those suffering soft tissue injuries in crashes will never fully recover from their injuries.

I say “willful blindness” because even orthopaedic surgeons, the medical specialty favoured by ICBC to provide “independent” opinions against injured victims, will agree with that scientific reality when cross examined.

This scientific reality is never shared with you.  Instead, it is assumed that you will fully recover, which is thankfully the reality for a much higher percentage of injury victims.  That assumption is bolstered by optimism expressed by your medical doctor and others on your medical team.

Optimism is an important medical tool.  The mind is a powerful healer.  The more optimistic you are about your own recovery, the more likely your optimism will be borne out.  I am certainly not saying that your injuries and the symptoms you are feeling are “just in your head”.  No, they are very real.  There is an established scientific interrelation, though, between the psychological and the physical.

If the optimism is not borne out, though, it is unfair and hurtful to say: “You should be better by now”.   You absolutely wish that you were better by now.  Certainly, the inattentive driver “should” not have crashed into the back of your vehicle.  There’s no concept, though that you “should” be better by now when you clearly are not.

By not enjoying a complete recovery, you have joined the unfortunate minority statistic of those for whom an inattentive driver has permanently harmed.

It is also unfair to point to other occupants of the same vehicle, who joined the majority of crash victims in enjoying a complete recovery, as an indication that you should not still be having symptoms.  That’s as nonsense and hurtful as telling anyone contracting a disease that afflicts a minority of people that it’s somehow their fault for joining that unlucky minority.

You are dealing with a bodily injury claims adjuster who, you believe, has expertise in this stuff.  He or she is a representative of the Insurance Corporation of British Columbia, a crown corporation, which you have paid insurance premiums to year after year.  That inherent credibility causes those words to sow seeds of doubt in your mind about your entitlement to fair, financial compensation for your injuries and losses.

Those seeds of doubt help the claims adjuster to convince you to accept a level of compensation that is far below what is fair.  It is a level of unfairness that I call cheating and it is every bit as distasteful in my view as those pathetic worms who try to cheat the insurance company.