Seventy-one year old Randi Kramer made headlines last week after being ticketed for distracted driving. The unlawful conduct?  Her plugged in cell phone was sitting in a cup holder in the center console of her vehicle. 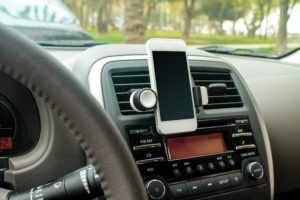 She wasn’t looking at nor touching it.

Her son said that she had gone out of her way to obey the law, noting: “She bought her car wanting one that had CarPlay, voice controls and Bluetooth.”

If you go out of your way to obey the law, you should be rewarded, not penalized on a technicality.

And let’s be consistent in our laws. If it’s perfectly legal to have your cell phone mounted in front of your face, how can it be reasonable to fine someone for having their phone down in a cup holder?

I don’t know Randi Kramer, but I suspect that with 50 years of ticket-free driving she is safety conscious. I would wager that she not only cares about obeying the law, but also about being a safe driver.

The two seem to go hand in hand. Traffic laws are passed to make our roads safer. Aren’t they?

Believing that hands free cell phone technology must be safe, because it’s legal, she purchased a car with CarPlay, voice controls and Bluetooth. Those features cost something. She paid something extra so that she could follow the law and drive safely.

But she was misled.

When our government passed distracted driving legislation that came into effect January 1, 2010, they held something back from us.

They held back the results of their own research into the scientific evidence.

Evidence that “Drivers fail to process approximately 50% of the visual information in their driving environment when they are using electronic communication devices”.

But the most critically important piece of scientifically proven information they failed to share: “Evidence also concludes that there is no difference between the cognitive diversion associated with hands-free and hand-held cell phone use”.

Sorry, Randi Kramer. You and most other British Columbians have been lulled into a false sense of security that hands free cell phone use is safe.

Before January 1, 2010, the driving public had been coming to the realization that cell phone use and driving didn’t mix well. We were coming to terms with the prospect that safe driving meant leaving your phone alone.

Some drivers were putting their phones in the glove compartment or trunk of their car.

Those choosing to use their phones while driving were at least alert to the danger, and likely tried extra hard to pay attention to the road to compensate.

And our roads became more dangerous instead of less. Doubly so in fact. Not only has the overall use of cell phones behind the wheel increased, but users are clueless about the danger.

Adding insult to injury, our government anticipated that result: “Legislation that bans only hand-held cell conversations conflicts with the research that has consistently found no difference in the degree of distraction between hand-held and hands-free cell conversations. As a result, these laws may not provide the expected benefits and may even generate harmful indirect impacts such as a false sense of security for those who talk on hands-free devices while driving”

I have been quoting from a “Discussion Paper: Addressing the Problem of Distracted Driving and its Impacts to Road Safety” published by British Columbia’s Ministry of Public Safety and Solicitor General in 2009, a paper clearly intended to inform government policy.

But the results were ignored.

And British Columbians are paying for it. You might not know that crash statistics were actually improving (fewer crashes) in the lead up to 2010. That positive trend ended, and reversed. Is that a coincidence, or a direct, predictable (and predicted) result of the idiotic law banning hand held cell phone use while driving?