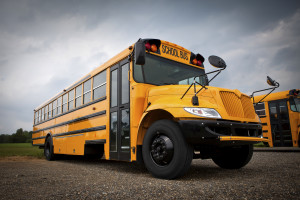 You’re following a school bus. Every couple of blocks it stops, the flashing lights go on and the stop arm swings out. There you are, stuck for the few minutes it takes for all the children to get off the bus. Can’t they move any faster? Worse, the bus driver doesn’t take off right away. Instead, he or she lingers with the stop arm out for that extra few moments, while the kids go toddling down the street.

It’s like the kids and the bus driver are all power trippers, snubbing their noses at the tax-paying driving public. If it wasn’t for that hefty fine, you would ignore the flashing lights and drive around the bus. What a ridiculous rule it is anyway, with the whole world having to stop turning while kids get on and off buses. Your route takes you through a school zone and 30 kilometres per hour seems stupidly slow, doesn’t it?

You can pretty much stop on a dime at 50 kilo-metres per hour anyway. Sure, if there were kids milling around on the road, you would slow down, maybe even slower than 30. But why putter just because of a silly sign? If it wasn’t for that hefty fine, you would ignore the sign. What a ridiculous rule it is that everyone has to drive at a snail’s pace just because there’s a school within a couple blocks.

Why can’t we be left alone? We passed the driver’s test. We are qualified to drive. Is it just another government money grab? Don’t they take enough taxes from us? They make dumb rules and attach hefty fines in order to dig more money out of our pockets. At least the cops can’t be everywhere. It takes only a few seconds to dart around a stopped school bus. If you keep a sharp eye out for cops you should be able to beat the system.

But a seven-year-old boy was killed Feb. 24, southwest of Calgary.v A motorist, likely thinking along those same lines, came up behind a school bus with its amber lights flashing, failed to stop and struck him. The driver of the car was shaken, but unhurt. Our child protection laws are in place for a reason.

Children can be unpredictable in how they behave. A distracted child will dart out into the street without any regard for oncoming traffic. So please sit patiently behind that school bus, slow to a crawl in school zones and make sure the same tragedy doesn’t happen in our community