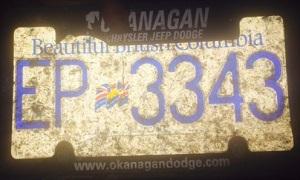 “My mom was just in a pretty terrible crash and is headed to the hospital.  The other driver didn’t stop.  Not sure I’m going to make it in tomorrow”.

That e-mail went to my iPhone just before 11:00 p.m., as I lay in bed.  I called my Case Manager (I’ll call her Melissa for the purpose of this column) as immediately as I could find her number.  She was still at the scene.

Melissa and her dad were notified by a passer-by who had come on the scene and helped make the call.  They had driven the short distance from their home, further up Glenrosa Road.  Had the other driver kept on his side of the road, Mom would have made it that further, short distance and been home with them.

Instead, an ambulance was taking Mom to the hospital.  Dad went along, leaving Melissa with the RCMP officer and others dealing with the crash aftermath.

Melissa was counting her family’s blessings as she filled me in.  She was thankful that it was not quite a direct head-on crash, the impact point being near the driver’s side front wheel.  And at least Mom was walking around at the scene.  Yes, there seemed to be a lot of blood, but a few stitches and she’ll be released that night from the hospital.

It’s a common gut reaction when something horrible happens:  “At least it wasn’t worse”.

I had a couple gut reactions.  That wasn’t one of them.

One was shared by the RCMP officer who was openly questioning how someone could have caused such a crash and left the scene without even stopping to see if the victim might need immediate medical attention.

Ironically, a brief stop might have increased the chance of getting away with it.  The offending driver might have noticed, and picked up, the incriminating license plate laying among the pieces of vehicle debris on the road.

My deepest gut reaction was a feeling of utter dread about the journey Melissa’s mother is now on.  I was almost in tears with the realization of how she was going to feel waking up the next morning and what I regretfully believe to be a likelihood of never fully recovering from the whiplash type injuries that occur during such a crash.

If I was a praying person, I would still be on my knees praying for the miracle of a quick and full recovery.  I happen not to believe in miracles.  I also know that as miraculous as our medical system seems to be at times, only so much can be done to help the healing of ligaments, tendons and other tissues that are damaged when part of us is held back by a seatbelt while other parts are not.

In case the fallen license plate has not already led to the identification of the offending driver by the time this is published, please contact me if you know anything about this crash or about a damaged white SUV.   However empty a consolation; I can at least lend a hand to ensuring that justice is done.