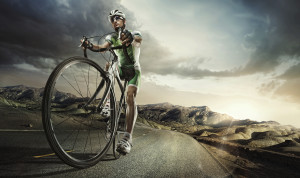 My office participated in the recent Bike to Work Week awareness program.

I have only a basic understanding of how it worked. I have a keen assistant who promoted the idea within my office and took care of the registration. I just enjoyed the exercise.

I believe that the goal of the program was to encourage people to choose this much greener and healthier mode of transportation for the daily commute to work.

The program was expanded this year to include school children, with a parallel Bike to School Week.

My assistant told me one of her motivations for getting involved was the prospect that a high level of participation might lead to increased funding towards making our transportation routes more bicycle friendly.

I have some personal experience with how unfriendly the roads in our area can be to cyclists.

A number of years ago, my wife and I came up with the bright idea that we would bike into Kelowna to see a movie. We lived in Glenrosa at the time.

On our way back, coming up Bridge Hill, a car almost sideswiped me, coming so close that the car’s side mirror nailed my left handle bar.

Fortunately, the mirror was the type that folds on impact, otherwise, I would have been sent flying.

The driver didn’t even stop to make sure I was ok. I decided not to go cycling on the highway again.

My decision was reinforced by a case I am handling. My client is an avid cyclist who has been riding from his home in Lakeview Heights to his work in Kelowna.

He had his left calf ripped apart when he was snagged by a protruding piece of equipment on a passing truck.

I am feeling another chill about using my bicycle as a mode of transportation as a result of an incident that occurred a week ago.

This chill, however, goes to the bone, and is tragically ironic.

My assistant continued cycling to work after Bike to Work Week. She left my office on her bike last Friday afternoon.

She was found laying on the side of the road approximately two blocks from my office. I don’t know when, or even if, she will be able to return to work.

She is a very experienced rider but the best I can figure from looking at the evidence, is a vehicle must have come up behind her and caused her to lose control. That vehicle and its driver did not stick around.

I’ve been out to the scene. And there is a very pronounced drop from the edge of the asphalt to the soft shoulder.

It’s the kind of drop that you wouldn’t notice in a car, but the asphalt edge would present an obvious hazard to a cyclist forced onto that soft shoulder.

Had the asphalt extended to the shoulder, or had the gravel shoulder been built up to the level of the asphalt, I expect my assistant might have been able to maintain control of her bicycle.

The incident occurred on Stevens Road. She was heading west and has just past the intersection with McDougall Road where the Bodyfit gym is located. She had not made it as far as the Fenders Autobody shop.

Obviously, the bicycle friendliness of that stretch of road has not been a priority for our municipal authorities, even though it is a very popular road running parallel to the highway.

If you agree that more resources should be put to making our roads safer for bicycle commuting, email me and I will forward your emails to the appropriate person.

The topic of my next posting will be the rights of a person injured in a hit and run incident, when the identity of the hit and run driver is unknown.

Published May 25, 2008 in the Kelowna Capital News