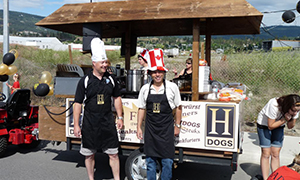 I chose the topic of my last post from a comment made by a lady who had sought my advice about her car crash claim.

Her comment was that she had come to see me because she thought, from reading my postings, that I was an honest lawyer.

Her comment implied that honest lawyers are a rarity. I made a case against that stereotype.

This week’s posting has similar roots, only this time the comments have come from watchers of the Westside Daze parade last weekend.

The comments came to me third hand, but a common theme was something like: “A lawyer would actually cook and hand out hot dogs?” Hergott Law had a float in the parade.

Picture me in front of a 1.5 metre grill, mounted on a utility trailer, being pulled by a lawn tractor.

I had a chef’s hat on and a pair of tongs, managing a hundred or so hot dogs at a time.

My role was to barbecue the hot dogs and get them into a pan. I had helpers, including my wife, stuff buns and hand out the free hot dogs.

It was a unique float. Have you ever heard of hot dogs, instead of candy, being handed out in a parade?

It wasn’t the uniqueness of the float that was the subject of most of the comments, however. It was the fact that a lawyer was up on the weenie wagon flipping dogs.

I have pondered why that is. Why is it that a lawyer up there would be different from anyone else?

Why is it that politicians flipping pancakes and RCMP officers cutting off their hair at cancer fundraisers draws such attention?

Perhaps it is because those activities show a humanness that is not expected from such members of our community. Perhaps doctors, lawyers, judges, police officers, clergy, and politicians are not seen as “human.”

Perhaps we expect such people to hold themselves somewhat aloof from the rest of us.

On thinking about it, I recognized I am guilty of such expectations as well.

I remember finding it refreshing to see a local doctor accompanying his daughter at soccer practice.

Why should that be any different from the thousands of other local fathers who do the same thing?

I have also had to re-evaluate my own stereotypical notions of the judiciary since a lawyer who I knew socially was elevated to the bench.

Could judges actually be human beings? My father has put it well, I think: “We all put our pants on one leg at a time.”

There is nothing special about someone who happened to go to school for a bunch of extra years and became a doctor or a lawyer.

There are real human beings behind the uniforms worn by the people who provide us with police, fire and ambulance services.

Perhaps we might prefer to think about these members of our community by way of their occupational labels rather than accept that they are just as human as the rest of us.

To be human means to be imperfect.

Our sense of safety and security might be compromised if we recognize the imperfections of those who we rely on so heavily to stand up for our rights, protect us from harm, cure our ills and lead various levels of government.

My wife would be the first to stand up to say I am just as human (imperfect) as anyone else, if not more so. I enjoy dancing to a hot dog song in a parade just like any other extrovert would.

I suggest that those within the inner circle of anyone with such an occupational label would, without exception, do the same things.