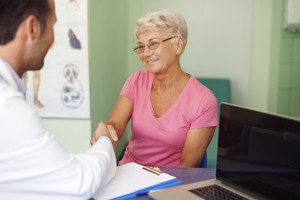 With the widespread use of seatbelts, car crash victims rarely suffer from broken bones.

The seatbelt holds you in your seat, stopping your body from flying around.  Bones are no longer broken as often, because the bones are restrained from whacking into hard things in the car that would cause them to break.

The most important bone that is protected by a seatbelt is your head.  A seatbelt stops this approximately 12 pound projectile from bashing into the windshield or other things inside the car, and causing serious brain damage.

Ironically, it is the life saving seatbelt that can be blamed for the types of injuries that replace broken bones and broken skulls.

The problem with seatbelts is that they hold only some of your body in place, not all of it.

That 12 pound projectile is still going to be launched.  A seatbelt does nothing to stop your head from flying around in a crash.  It just stops your body from moving.

Your head will fly forward until it is yanked back by your neck, which connects the stationary upper torso and the completely unrestrained head.  The classic whiplash injury is to the muscles, tendons and ligaments in the neck area, the “soft tissues”, connecting the upper body with the head.

This posting is not about the biomechanics of a car crash injury, though. It is about achieving justice in injury claims.

One of the nasty negotiation tactics of the insurance company is to point to the medical evidence and ask the question: Where is the evidence of injury?

With no objective symptoms, you are left with subjective pain, which the insurance company discounts as unreliable.  You face the insinuations that it’s all in your head, or you are exaggerating or making it up.

Can justice be achieved with these types of injuries?  You betcha.

Your sworn testimony, describing your pain and stiffness since the crash, is not discounted by the Court unless your credibility has been successfully challenged.

Also, we don’t live in a vacuum.  Our lives are built around relationships with other people: family members; friends; work colleagues.  Those other people in your life will give sworn testimony about how you have been different since the crash.

Don’t allow baseless insurance company arguments to distract you from the very modest goal of achieving a just result.  When the adjuster points to a lack of objective symptoms as a reason to discount your claim, tell the adjuster that you can recognize bunk when you hear it, and hand over a copy of this posting.