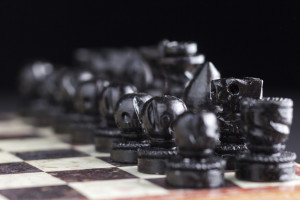 Nobody likes to discover that they have been manipulated by a negotiation tactic.  Once burned, do you feel like telling the world about it?

I am about to “tell the world” about how I allowed myself to be manipulated by a negotiation tactic, one I ought to have been prepared for because it is regularly used on my clients by ICBC and other insurance companies.  This is my second of a series of columns exposing tactics used by insurance companies when negotiating personal injury claims.  By learning about these tactics, I am hopeful that you might avoid being manipulated by them in any negotiation you might encounter.

A number of displays had been set up one evening at the all-inclusive resort in Mexico where we had been staying.  A beautiful, stone, chess set caught my eye.  My father had hand crafted a wooden set, which got me interested in playing chess when I was a boy.  Even though I had never become a master chess player, I liked the idea of having a beautiful set in our home so that perhaps my own children would show an interest.

I was new to holidaying in Mexico, but knew enough that you never pay the sticker price.

It was a handsome sticker price.  I didn’t expect it to be so expensive!  I really had no idea, though.  Each piece had to be hand carved, and then there’s all the stone tiling on the board.  A piece of art, really.  You get what you pay for, right?  This was nothing like the multitude of mass produced trinkets that crowded all the other shelves.

I actually felt a little guilty dickering on the price of such a beautiful piece of art, but haggling is what it’s all about when you’re wheeling and dealing in Mexico.  I got a really good deal at the end of it all, convincing the seller to let the set go at a significant discount.

The sick feeling in my stomach, when I realized I had grossly overpaid, came when following my wife around a nearby town a couple days later.  The exact same style and quality of chess set was on display by the dozen, the sticker price even less than the “deal” I got from the vendor at the resort.

How did I, someone who negotiates millions of dollars of claims every year, get “taken” in a negotiation?  I entered into the negotiation without having a clue about the value of the item I was negotiating for.

The grossly inflated “sticker price” set the stage of the negotiation.  The vendor was able to suck me in to paying much more than I should have by giving me what felt like a great deal because he reduced his price so much.

It’s a classic tactic in an ICBC claim negotiation.  They’ll start negotiations with lowball offers at $5,000.00 or less for claims where fair compensation for injuries and losses is $40,000.00 or more.  By doing so, they set the stage of the negotiation.  The unsuspecting injury victim knows enough to “not accept ICBC’s first offer”, and feels like they got a good deal when ICBC beats their lowball offer and goes up to $15,000.00.

The most “fun” example of this in my practice was where a client retained me after ICBC had offered eight thousand dollars to settle a soft tissue injury claim that ended up settling for fair financial compensation of over eight hundred thousand dollars.

How do you protect yourself from this negotiation tactic?  Do what I should have done in Mexico.  Find out the true value of the item you are negotiating for, so that an unfairly high (or low in the case of a personal injury negotiation) sticker price doesn’t manipulate you into an unfair result.