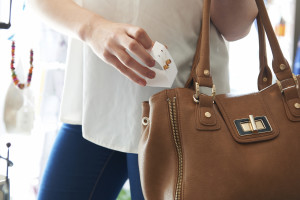 Your 14-year-old daughter does something really stupid. I don’t mean to be terribly offensive to my younger readers, if they exist, but kids do dumb things on a regular basis.

That’s not to excuse the behaviour, either.

What does she do? She tries to shoplift a tube of lipstick.

She is caught in the act. Store security personnel make her wait until the RCMP show up. You get the lovely call from the investigating officer and, steaming mad, go pick up your daughter.

It is her first offence and criminal charges are not pursued. Regardless, your daughter would prefer to deal with the law instead of the consequences she faces at home.

Your daughter is horribly embarrassed. It’s some time before she can look you or her father in the eye again. She dreads going to school for fear the rumour is circulating.

Yes, she had it coming, but I have some sympathy for her.

What about our retail sector?

Shoplifting is about as ancient an activity as prostitution. It costs our retail sector ridiculous amounts of money.

It costs them as their merchandise walks out of the store in shoplifters’ pockets, and it costs them in expensive store security systems and security personnel.

The slaps on the wrist that shoplifters seem to get just don’t seem serious enough.

Some retailers have taken matters into their own hands.

From time to time, I am consulted by a concerned parent who has been sent a demand letter from a law firm, typically from outside of British Columbia, demanding that his or her child pay hundreds of dollars to avoid being sued by the store where the child was caught shoplifting.

One demand went so far as to demand that the parent, herself, pay to avoid being sued as a result of her child’s errant behaviour.

The latest demand came across my desk last week. It demanded payment of $575 within 15 days to release what was referred to as the store’s “civil claim.”

The demand threatened that if the store proceeds with a lawsuit, the store may be entitled to “damages, plus interest, legal fees, and other expenses as determined by the court.”

That kind of thing really gets me going. As defined in the online Merriam-Webster dictionary, obtaining something by intimidation is called extortion.

It was a $2 item, which was recovered. A store security person was held up for 25 minutes until the RCMP arrived. The store lost nothing as a result of this incident.

Is there a basis for a civil claim on those facts?

I did a little research. I found one neat case out of Manitoba where a store demanded $225 from the mother of a 14-year-old shoplifter to avoid being sued. The mother, not knowing any better, paid the money. She then sought legal advice and sued for return of the money. She was successful. The court found that a parent could only be liable for their children’s actions if they, themselves, had done something wrong.

The balance of my research revealed that lawsuits by stores against shoplifters are extremely rare, and did not reveal any such reported cases in British Columbia.

I did find authority for the court to make a “token” award in the store’s favour against a shoplifter, but I have only seen the token amount of $100.

There is also authority for the court to award punitive (punishment) damages, but that would only happen in a more serious case such as one that I found out of Alberta where a career criminal who had been caught twice in the same store stealing a total of $843.88 worth of stuff was ordered to pay $1,000 in punitive damages.

What store is going to go to the legal expense of suing a 14-year-old shoplifter when they know that the best they are going to get is about $100?

It makes no sense. Add to that the fact that a lawyer’s fees spent prosecuting a $100 claim absolutely cannot be claimed against the defendant, and the demand letter is very clearly a misleading and empty threat.

We are fortunate, in British Columbia, to have legislation that is intended to protect the public from such conduct.

Section 123(a) of the Business Practices and Consumer Protection Act states that a person attempting to collect a debt “must not supply any false or misleading information.” Perhaps bring that section to the foreign law firm’s attention.

Are you being harassed by repeated telephone calls or letters? How about section 116(4)(c) that prohibits any communication with you whatsoever once you tell the supposed creditor that the debt is in dispute and invite the creditor to follow through with the empty threats and sue you?

People are taken advantage of at every turn when they don’t know their rights. Ensure you get the straight goods and consult a lawyer if you are ever in doubt.