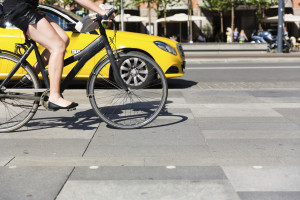 With our ever growing (in girth) population, it seems to me that the main topic of discussion for “bike to work week” should be how to motivate us all to choose the healthier commuting option.

Instead, the main topic of discussion is about cyclists and motorists, and cyclists and pedestrians, sharing the available space from point A to point B.

It seems we don’t share well, particularly in comparison to some other countries, with much denser populations, where masses of cyclist and pedestrians manage to co-exist with motorists.

The main discussion feature seems to be motorists bellyaching about cyclists.  Cyclists are “vehicles” under traffic laws and many of those darned cyclists appear to ignore those laws.

Road safety is raised, when you listen to the points raised by motorists and their tone when raising those points, road safety takes the back burner.

I don’t hear motorists expressing genuine concern for the safety of cyclists.  If safety was the genuine concern, instead of bellyaching I would hear suggestions and strategies about how to protect cyclists.

I would hear things like: “It is dangerous for cyclists to ride at the very edge of a road, as sometimes there is an edge where the asphalt ends and loose gravel begins that can cause a cyclist to lose control, so give cyclist lots of room when passing them”.

Maybe, someone would call into a radio show and say: “I felt horrible when a young person on a bicycle pulled out directly in front of my car and I almost hit her.  I have learned an important lesson that when coming up behind a child on a bicycle I need to expect the unexpected, slow right down, give a little honk to make sure the child knows I’m there, and then carefully pass.”

Instead, I hear impatient and irritated complaints about those annoying cyclists.

Perhaps we want to deflect attention from the motivation problem.  It’s much easier for us motorists to bellyache about cyclists than to seriously consider why we aren’t joining them.

Perhaps we’re just jealous.  There we are, sitting on our butts in our polluting vehicles that we pay to insure, maintain and fill with gas, our mid-sections continuing to grow, while those cyclists are burning a bunch of calories, getting fresh air, while doing the same commute that we do.

Why are we so damned selfish and self-centred?

Bike to Work Week marks an anniversary.  One of my (regretfully former) staff took it upon herself to motivate the office to get on our bicycles for Back to Work Week a few years ago.  She was a very experienced cyclist.  She always wore her helmet.  On her way home, on her bicycle, within two blocks of my office, an impatient motorist crowded her off the asphalt edge, causing her to lose control and suffer a serious brain injury that she is continuing to suffer from today.

I invite you to read Deb’s story on OneCrashisTooMany.com

How ironic.  How tragic.  How pathetic.

Published May 30, 2013 in the Kelowna Capital News