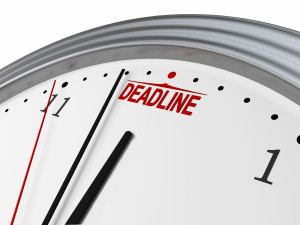 I’m going to finish a story that I started telling in my previous column published October 5, 2008, which was entitled “When it comes to injury claims keep an eye on the clock”.

The beginning of the story, told in that column, is how I had managed to avert injustice by commencing a lawsuit in the nick of time.

Most people who consult with me about their injury claims are aware that there is something called a “two year limitation period”.  Not many of those people have a full appreciation for how significant that limitation period is.

It doesn’t matter how serious your injuries are.  It doesn’t matter how much money the insurance company has already offered to settle your claim.  If the Court Registry doors close at 4:00 p.m. on the second anniversary of the crash without a lawsuit having been commenced, your claims for fair compensation will end.

Our legal world, and the world in general, is full of deadlines that are not absolute deadlines.  You may have to pay a penalty or apply to the court for an extension, but the law is typically very reluctant to completely eliminate legal rights for failure to meet a deadline.

This is an exception.  It is one of those very rare absolute deadlines.  No matter how much you beg and plead.  No matter if being struck by lightning, picked up by a tornado, or taken hostage by terrorists is to blame, that deadline will not be extended.

So imagine my sense of urgency when an injured victim’s sister told me that her sister had been injured a “couple years” before, and on pointed questioning I learned that it was the 2nd year anniversary of the crash.

That injured victim understood from her discussions with the insurance company adjuster that the two year limitation period meant that if she didn’t settle her claim within two years, then she had to hire a lawyer.  She’s not alone in that grossly dangerous misunderstanding.

I wonder how many claims for fair compensation the insurance company gets away with not paying because the two year limitation period is missed.  Perhaps a request under the provincial freedom of information legislation might give me the statistics.

That case came to a successful resolution last month.  Regardless of the limitation period, it was worthwhile to get a lawyer involved.  She ended up, in her pocket, with just over three times the amount of the insurance company offer after paying my bill.

Please understand that the result in that case had nothing to do with me.  Any competent personal injury lawyer could have achieved the same result.

I am going to add a proviso on limitation periods.  For some legal rights, the limitation period can be different than two years, either shorter or longer.  In some, rare circumstances, there can be a delay in when the clock starts ticking, which could extend the deadline.  For young people, for some but not all types of claims, the clock doesn’t start ticking until the 19th birthday.

Please, if you or your child has legal rights arising from an injury, get in to see a lawyer immediately on a free initial consultation basis to find out what deadline applies to your particular case.