How is it any different from talking to a passenger? 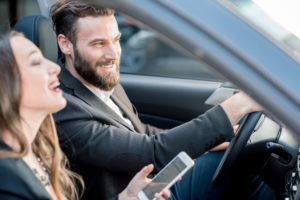 Predictable as a ticking clock, I face that question every time I share the science that hands free and hand held cell phone are identically dangerous driving activities.

So of course that question came up in response to last week’s column where I shared that science.

Let’s break it down.

Does it go without saying that it’s safe to chat with your passengers?

Have you ever seen a sign on a bus saying not to talk to the bus driver?

There is a children’s book called “Don’t Chat with the Bus Driver”.

A young pig, crocodile, rabbit, fox, hen, cow and frog are each told not to chat with the bus driver. In turn, each young rider promises not to, and then breaks their promise resulting in all sorts of consequences like the bus driver missing a stop, driving into a tree and going the wrong way.

An online search revealed this stipulation within the Pupil Transportation Procedures Manual for BC’s School District 7, Kootenay Lake: “Students are to refrain from talking to or distracting the driver while the bus is in motion”.

I haven’t seen the science about talking to bus drivers. And a children’s book doesn’t prove anything. Nor do selective bus passenger codes of conduct.

But please don’t jump to the conclusion that chatting with your passenger isn’t dangerous.

The science I’ve shared is comparing hand held to hands free cell phone use. Scientific studies have concluded that each is cognitively distracting, and the level of distraction is identical.

Your eyes are open. You are looking out of the windshield. But you miss up to 50% of what is going on out of that windshield because your brain is engaged in a discussion.

If it’s about having your brain off the road, engaging in a discussion with your passenger is likely distracting as well.

But there are differences. Don’t give me any credit for identifying these differences, by the way. I learned about them from Understanding the Distracted Brain, a white paper published by the National Safety Council (United States).

Your passenger (if an aware adult sitting in the front seat) is a second set of eyes. Both of you are cognitively distracted by your discussion, each of you missing up to 50% of what’s going on out of that windshield, but hazards you miss can be caught by your passenger.

We have all had experiences when our passenger has alerted us roadway hazards we have missed.

And what happens to your conversation with a passenger when traffic conditions become congested or complicated?  Does the pace of discussion slow, and at times actually stop, each of you conscious about the increasing demands of your driving attention?

The person you are chatting with on your cell phone is not a second set of eyes. And has no awareness of changing driving conditions.

If talking to a passenger is cognitively distracting, should we ban it?

I don’t think so.

We need to enlighten drivers that any time we are engaging our brains in a discussion, whether it is with a passenger or on a cell phone, we are cognitively distracted. We are looking at, but not processing, up to 50% of what’s going on around us.

We need to ban all cell phone use while driving, giving drivers the true message that it’s “brain off the road” not “eyes off the road” that’s the primary problem.

Awareness that chatting with a passenger is distracting will hopefully lead both drivers and passengers to be cautious about becoming wrapped up in a discussion, and to compensate by each of them paying extra attention to the roadway while choosing to chat.

Awareness, and compensation, are key. And friends, that will be the topic of my next column. The most dangerous drivers are those, like Mr. Magoo, who are blithely unaware of their lack of awareness.

Who is Mr. Magoo?  Check out this video: Mr. Magoo