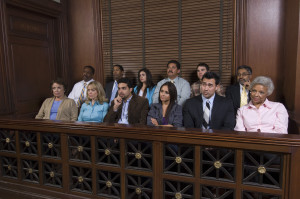 “Houston, we have a problem”. Those words were uttered by a British Columbia Supreme Court judge May 4, on day six of a personal injury jury trial.

The plaintiff in that case was injured in a car crash. The Insurance Corporation of British Columbia (ICBC) was defending the claim. (This isn’t the case I wrote about previously where an ICBC lawyer, aided by an insurance company adjuster, re-searched the claims histories of jury members.)

In this case, it was members of the jury themselves who were the problem. Traditionally, a civil jury is treated like a mysterious black box. Eight people of varying backgrounds sit there for a week or two hearing hours and hours of evidence, and are handed binders of documents. It’s likely none of them have any experience in the medical field, but they are hearing a personal injury case.

At the conclusion of the evidence, the judge spends several hours describing the complex law that applies to the case. The jury then goes off to deliberate and comes back to spit out an amount that the injured person is to receive in financial compensation.

The jurors are not asked to give reasons for their decision. In fact, it is illegal for them to discuss their decision-making process. On May 4, the legal world got a rare glimpse inside that black box. One of the jurors blew the whistle on others on the jury panel. He asked to be dismissed from his jury duty because he did not want to be a part of what he considered the unfairness that was going on.

This particular juror had served on a jury before. He knew some of the rules. He also had the guts to stand up for justice .For starters, there had been clear indications of racism. The plaintiff was not caucasian. As it turned out, she had gone to a doctor who had a similar heritage. A comment had been made that she and her doctor were in cahoots, simply because they had the same heritage.

Another serious problem was a comment by one of the jurors that they should not compensate the plaintiff for all her medical expenses because, if they did so, their insurance premiums would go up. That comment is the most troubling to me. On the one hand, the insurance corporation has policies that encourage a jury to believe that the verdict it makes will come out of the negligent driver’s pocket, instead of the mammoth insurance company’s very deep pockets.

For example, in a previous column, I exposed the policy of requiring the negligent driver to attend, and sit through the entire trial. That trick can lead a jury to believe the defendant has a financial stake in the result, and that’s utter bunk. A jury tricked into worrying about the defendant’s financial well being is unlikely to award fair compensation to the injured victim. On the other hand, we have this jury member who was well aware that ICBC would be paying the judgment, and was selfishly worried about his or her own premiums going up instead of doing his or her proper jury duty.

Regretfully, I doubt that this jury member’s perspective is a unique one. In this case, the insurance corporation insisted on a jury. Was it because the injured victim was Iranian? Was it because of the general public’s bias against people who insist on fairness and hire a lawyer to help them achieve that?

Was it because it knows there are likely to be members of the jury who are more concerned about their own premiums than about the injured victim? This jury was dismissed. The case could have continued without the jury, with the Judge making the compensation award, but insurance company had given marching orders to the defence lawyer to have the case heard by a jury.

In the circumstances, the judge had no choice but to declare a mistrial. Six days of trial were wasted because of that decision. What do we learn from this? Perhaps, we could conclude our jury system is broken. But I refuse to come to that conclusion.

I continue to believe strongly in our system of justice, including jury trials. What each of us needs to do, whether we are on the playground or sitting in a jury box, is to insist justice is done. We need to be ready to blow the whistle on the unfairness we come across in our lives, wherever we find it. Do your part.