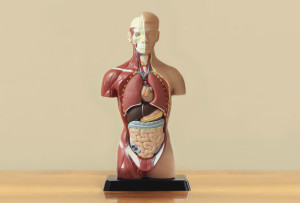 A first aid course is the full extent of my formal medical education.  Over the years of handling car crash injury cases, though, I have benefited from extensive “on the job training”.

Every one of my clients is a case study.  I take a detailed history and review clinical records.  My clients fill me in on what the family doctor and specialists recommend for treatment and I hear about the benefits of various modalities of care.  Near the conclusion of a case, I obtain and review medical reports of therapists, doctors and specialists.

I have an anatomic model in my office that would stand up proudly against that of any specialist in this province.

My “on the job training” has prepared me well to perform one of the most important aspects of my work as a personal injury lawyer, which is to ensure that absolutely no stone is left unturned in the pursuit of as full a recovery as is possible.

Leaving any stone unturned gives the defending insurance company a way out of paying fair compensation.  It gives them what I refer to as the “magic pill defence”.

Nobody, including the members of a jury, likes to think about an injured victim having to suffer pain and functional limitations for the rest of his or her life.

It’s a disturbing thought.  If I accept that that person is never going to recover, then I have to accept that if I, too, was rear-ended and suffered the same injuries, I might not ever recover either.

I would have to accept that If my wife child suffered the same injuries, they might never recover either.

It’s easier for us to believe in a cure.  It’s easier for us to look for and believe in a “magic pill”.  It’s 4 ½ years after the crash and physiotherapy and chiropractic care have failed to bring about a cure, but some other therapeutic option has not been fully explored.  Some specialist has suggested active release therapy, or botox injection therapy as possible options.  As unlikely as it may be with chronic symptoms having set in, maybe one of those options will make all the difference and bring about a full recovery.

Sometimes the “magic pill” is time.  No stone left unturned in the therapy department, but time will bring about healing.  It’s already 3 years since the crash, and symptoms haven’t improved at all for the last six months, but just give it more time and there might be some further recovery.

To do this job right, a lawyer must play doctor to ensure that every magic pill is swallowed before the case gets close to trial.  Leave a magic pill on the table and there is likely to be a travesty of justice arising from the hopeful optimism in the courtroom that a magic pill will cure the injured victim.

Optimism for recovery leads to compensation being assessed on the basis of a temporary injury, not a permanent one.  The injured victim, who has faced misplaced optimism ever since the first doctor out of the gate told her she would be fine in a couple weeks, is left victimized yet again.

Once a case has been settled, or there has been a court judgement, there is no going back for the shortfall in compensation after the magic pill didn’t work.

So there’s “Doctor Paul”, doing my best to anticipate all the magic pills the defence insurer might come up with and to ensure those pills are taken as early as possible so that they’ve had time to work their magic.

My “doctoring” includes preparing my clients to make referral requests of family doctors who don’t have the luxury of time nor resources to fully review the patient’s condition and clinical history on a regular basis.  It also includes making private referrals of my own to specialist to get opinions for use in prosecuting the claim, which opinions almost invariably include treatment recommendations that can be passed on to the treatment team for implementation.

I tread carefully, knowing that any involvement of a personal injury lawyer in care may be perceived by some doctors as meaning that the patient is more concerned about their injury claim and less concerned about getting better.  I try to stay under the radar as much as possible because that perception could not be further from the truth.

The reality is that my goals, and the goals of my clients, are aligned with those of the treatment team.  We all want the patient to recover from his or her injuries as quickly and fully as possible, pulling all the stops.  Doing so has the added benefit of ensuring that we’re not left with the kind of unfair result that can arise from pursuing care in an incomplete or non-exhaustive way.