A very recent court decision confirms that you are not to be penalized for soldiering through your pain. 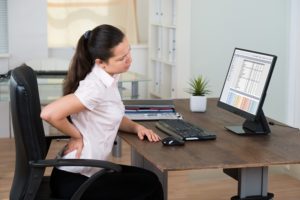 By the next morning she had become extremely stiff and sore. Over a few days her pain concentrated in her right neck and two areas of her back. She continued having symptoms in those areas through to the trial four years later.

The only time she missed from work was the first three days, when her symptoms were at the worst. She did not feel ready, but felt pressure to return to the small kitchen where she worked at the time.

She continued working in restaurant kitchens, but for the most part managed to work in more supervisory or administrative roles which were less impacted by her ongoing symptoms.

A co-worker came to the trial and testified having observed Ms. Stapleton struggling with some of the physical aspects of her work, that she was obviously in pain but carried on nonetheless. She described a “kitchen culture” of workers being reluctant to show weakness or ask for help.

Ms. Stapleton’s past income loss totaled only $350.00, for the three initial missed shifts. And with increasing experience and responsibilities, her earnings actually increased year after year after the collision.

She managed to work around her symptoms in the four years leading up to the trial. Did that mean she was not entitled to compensation for possible future losses?  In order to achieve compensation, an injured victim must establish “a real and substantial possibility” that her earning capacity has been impaired.

Evidence at the trial included the results of objective physical testing called a Functional Capacity Evaluation, as well as the expert opinions of two specialist doctors.

The judge came to the following conclusion as a result of all the evidence: “I am satisfied that the plaintiff’s injuries impede her ability to work in her chosen profession as a chef. In particular, she cannot perform sustained activities that involve bending or stooping, such as chopping, kneading and whisking, all of which are common food preparation activities. She is also limited in her ability to lift heavy objects, again something that is common to kitchen work.”

The evidence was that less physically demanding kitchen management positions that Ms. Stapleton had managed to find were difficult to obtain, particularly with someone with limitations on their ability to do the cooking work. The evidence led the judge to conclude: “I am satisfied that she has been rendered less capable of earning income from all types of employment, is less marketable or attractive as a potential employee, has lost the ability to take advantage of all job opportunities that might otherwise have been open and is less valuable to herself as a person capable of earning income in a competitive labour market.”

Ms. Stapleton was awarded $80,000.00 of compensation for her loss of earning capacity.

How did the judge come up with that number?  Judges do not have crystal balls to gaze into the future and accurately assess how injuries will impact on a person’s lifetime earnings. One approach has been to award an amount approximating one or more years of the person’s salary, depending on age, the level of impairment and other factors.

Do you feel that Ms. Stapleton has been over-compensated?  Then I have failed to adequately nutshell the case. Please take the time to read about how this young woman’s life has been permanently altered.

According to American statistics (because British Columbia statistics are not available), approximately 32% of collisions resulting in injuries are rear-enders like the one that injured Ms. Stapleton (Facts + Statistics: Highway safety.

All it takes to avoid driving into the back of a stopped vehicle is to remain attentive to the road ahead of us. Each of us can do our part by doing the work necessary to maintain our own attentiveness, avoiding any activity (like cell phone use whether hand held or hands free) that actively distracts our attention, and insisting on the same from others when we are passengers.

And please reassure those you know who are struggling to work through crash injury related symptoms. The law entitles them to compensation for future losses if there is a real and substantial possibility that their earning capacity is impaired, even if their past income loss is extremely minimal.