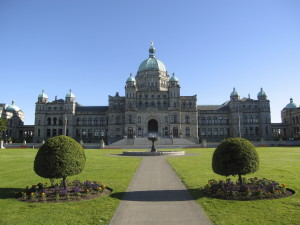 The story I am about to tell is a matter of public record. Anyone wanting to review the reasons for judgment released June 4 can e-mail me for a copy. But don’t get excited about hearing any juicy details about a love triangle resulting in dripping, courtroom drama.

This story is about the bittersweet combination of victory and loss, justice and injustice. The facts are not exciting. Gil Barry Contracting Ltd. was hired by a local developer to clear debris and vegetation that had built up along a rarely used portion of Drought Road in Peachland.

Company owner Gil Barry has lived in and around Peachland, doing that type of work, since moving to the community more than 35 years ago. He and his wife, Jean, have built a strong reputation for their excavating and trucking business. Their reputation in the growing, but still comfortably small, community is very important to them.

The company has become a family business with son Darren one of the equipment operators, with about 20 years experience. It was Darren who did the road clearing work on Aug. 23, 2007. The job was completed with eight tandem dump truck loads of debris left piled on the road to be trucked away the following day.

The evidence at trial was that Darren did the road-clearing work in a workmanlike manner. Not only that, but the evidence was he went beyond clearing out the ditch and roadway and did something called “rock scaling” along the steep bank leading up to the highway.

Rock scaling involves the removal of loose rock that presents a hazard and might fall onto the road in future. But the following day, members of the Peachland municipal council, including then Mayor Graham Reid, showed up at the site. For some reason there was bad blood between the municipality and the developer, which Gil Barry had no prior knowledge of.

Tempers were hot. There was even a brief tussle. Reid gave Barry three hours to get his equipment off the property. He denied Barry the opportunity to use that equipment to remove the debris, which had been the plan. Shortly thereafter, the District of Peachland told its lawyers to launch a Supreme Court action.

It sued the development company, as well as the principal of that company, alleging the work had not been authorized. It also sued Gil Barry Contracting Ltd., and Gil Barry personally, for not asking the district if authorization had been given.

The irony, which I will go so far to describe as dripping, is it was the responsibility of Peachland to maintain that portion of Drought Road, which had become impassable over the years due to neglect. In effect, it was suing my clients for doing work it should have done itself.

It appeared to me the lawsuit was all about Peachland flexing its muscle in a tiff it had with the developer, and my clients were caught in the middle. Peachland didn’t push the lawsuit forward. It sat on the books.

My recommendation was to let it wither and, hopefully, eventually die, to keep what I viewed as a ridiculous waste of legal dollars to a minimum. I understood the outstanding lawsuit was being held over the developer’s head in its ongoing development dealings with the municipality.

The expensive machinery of the court process was therefore engaged to bring the matter to trial. Peachland had many opportunities to back down, but didn’t. As we all know, it takes a lot to admit you are wrong.

If you look at the judgment, justice was served. The action was dismissed entirely against my clients, and Peachland has paid them costs of just over $5,000. The action was also dismissed against the principal of the developer. Based on a technical trespass, because authorization had not been specifically given for Darren Barry to go “above and beyond” and do the rock scaling, the developer was ordered to pay Peachland less than $2,300.

Media reports have stated Peachland paid the developer defendants $9,800 in costs. And perhaps there was a bit of courtroom drama. It became clear to me that things were going very badly for Peachland when the judge, during the trial, referred to its representatives as coming around in their pointy white hats.

The bitter in the bittersweet comes from the rest of the story.

Peachland taxpayers, through no fault of their own, are stuck with the bill of approximately $12,500 and a debris removal bill of more than $5,000 that could have been avoided had tempers not gotten in the way of allowing the company to remove the debris as planned.

They are also stuck with their own legal bill, which would be considerable. My clients and the developer were stuck with the difference between the “costs” they were awarded and the actual legal bills, which far exceeded those awarded costs. And my clients had to endure the embarrassment of having been sued by the very municipality in which they have worked so hard to develop an excellent reputation.

I know from dealing with Jean and Gil Barry that the stress on them was considerable. It turned out to be an expensive muscle flex for all concerned, and a move I hope the Peachland decision makers of the day deeply regret. My clients have not yet received an apology, but perhaps one will be coming.