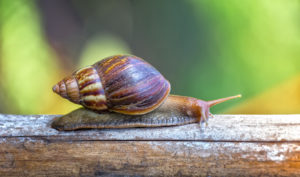 Jordan said those words with paused, deliberate emphasis as he commented on road safety.

He was referring to my last column, when I wrote about the congested traffic situation when two lanes come to a stand still while vehicles continue to flow freely in the HOV lane.

Neither the left turner, thankful for the space left for him to pass through the congested lanes, nor the HOV driver facing a green light, can see each other.  The two lanes of stopped traffic are in the way.

The lesson from case law, which is simply common sense, is that each driver should be alert to the dangerous circumstance and approach it with slow caution.

In Jordan’s words, if only everyone would just, slow down.

He went on to explain that he meant his words to apply not just to driving, but to society in general.

Approaching his 60th birthday in the Spring, 2017, Jordan was sharing some wisdom.

I had been at my desk since 6:30 a.m. that morning, as I am every weekday morning.  My movements around the office over the next 11 or so hours are better described as jogging than walking.  I don’t take time for breakfast, and my lunch break is just long enough to scarf down the sustenance necessary to make it through the rest of my day.

I don’t know if he was intending to pass on that bit of wisdom for my benefit, or if he was just being philosophical.

Perhaps, like with driving, just slowing down would do me, us all, some good.

I wish you the very best the season can offer.

I especially wish for a holiday season that is free from life changing, or life taking road traffic incidents.  We could do it.  It doesn’t have to stay a fanciful dream.

Imagine a coordinated media blitz bringing road safety to the top of our minds as we are out and about this season.

We could focus on a particular week, every radio station using 5 second time slots over the course of each day to remind us of our goal.

Local web based and hard copy newspapers could pitch in by peppering their product with the smallest of ads.

Each of us could lead by example, showing exceptional courtesy and care behind the wheel and insisting on the same from those around us.

We could set aside a week to just, slow down.

The expense would be minimal in comparison to the phenomenal value.

Who wants to participate?  The five second snippets need to be drafted; the graphic design for visual news media needs to be done.

If you are serious about road safety, we invite you to take the 10 & 2 Driving Challenge.